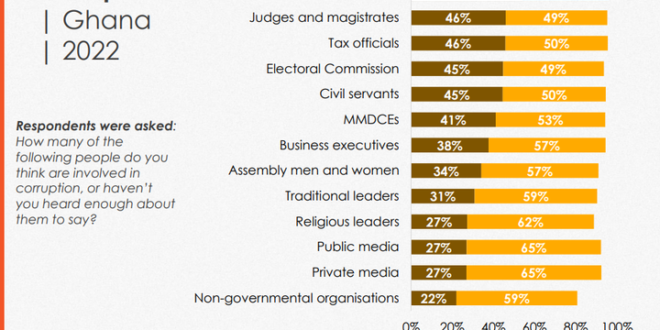 Office of the Presidency Followed In second place on the corruption perception.

The Ghana Police Service and the Office of the President are perceived as the country’s most corrupt institutions.

This is the outcome of an Afrobarometer study undertaken by the Ghana Centre for Democratic Development (CDD-Ghana).

The research found that the Police’s score of 65% placed it at the top of the chain while the Presidency followed in second position with 55%.

The report also placed members of Parliament as the third group of people in the pack with a score of 54%.

Per the assessment, positive ratings of the President’s performance declined by 31 percentage points between 2019 and 2022, from 61% to 30%.

Judges and magistrates, tax officials and the Electoral Commission followed suit in that order.

This was made known at an event in Accra organised by the CDD-Ghana.

The project bordered on democratic governance, trust in institutions and corruption.

The sample size of 2,400 people was distributed across regions/states/provinces and urban/rural areas in proportion to their share in the national population.

Meanwhile, the Ghana Armed Forces, religious and traditional leaders, and the courts were the most trusted institutions in Ghana.

This comes on the back of another survey conducted by the Ghana Statistical Service (GSS) and the Commission on Human Rights and Administrative Justice (CHRAJ), which placed the Lands Commission officers, prosecutors, judges or magistrates and immigration officers as the top three categories of public officials who received the largest cash bribes paid in 2021.

The survey was dubbed, ‘2021 Ghana Integrity of Public Services Survey’.

According to the report, the average highest cash bribe [¢1, 669] was paid to Lands Commission officers, followed by prosecutors, judges or magistrates with an amount of ¢1,208 and ¢950 for immigration officers.

I'm Adwenpa-Hene |Blogger & Broadcaster Journalist. I am the CEO and manager of this noble website. I publish on Entertainment, Sports, Politics, Lifestyle, and Technology. You can also follow Us on : YouTube Channel - My Ghana Media TV, Facebook - MyghanaMedia TV , Twitter - @MyGhanamedia2 & Instagram - My Ghana Media TV. Email Address: [email protected] Contact Us: 0200818719
@@MyGhanamedia2
Previous Government Reacts To Minority’s Claim That BoG Has Printed GH¢22bn Without Parliamentary Approval
Next Tsatsu Tsikata: Only Uninformed People Say 1992 Constitution Was Made For J.J Rawlings