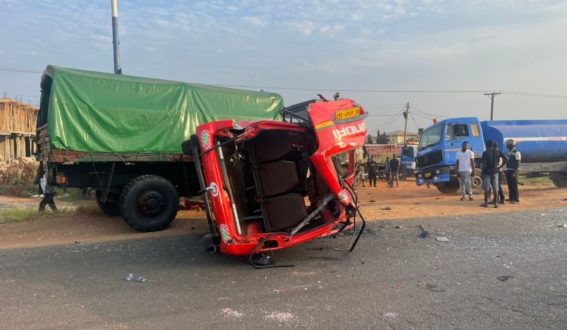 A military vehicle and a public transport bus (Trotro) have been involved in an accident on the Dawhenya road.

The incident occurred this morning.

Details are sketchy. Our reliable source will keep readers updated.

The Tema-Aflao stretch is an accident prone area.

This morning’s incident adds to the number of accidents recorded on that road.

Nationally, a total of 232 deaths were recorded from road crashes in January 2022 as against 244 in January last year, representing a 4.92 per cent decrease in deaths recorded within the same period.

The Ashanti region recorded 44 deaths making it the region with the highest number of deaths, followed by the Greater Accra Region with 31 deaths.

The Eastern and Western North Regions both recorded 25 deaths.

The remaining regions had their number of deaths being less than 20, with the Northeast region recording no death.

In all, 1,237 road crash injuries were captured within January 2022 whilst in January last year, the number of injuries stood at 1,393.

This figure represents a decrease of more than 11 per cent of road crash injuries.

I'm Adwenpa-Hene |Blogger & Broadcaster Journalist. I am the CEO and manager of this noble website. I publish on Entertainment, Sports, Politics, Lifestyle, and Technology. You can also follow Us on : YouTube Channel - My Ghana Media TV, Facebook - MyghanaMedia TV , Twitter - @MyGhanamedia2 & Instagram - My Ghana Media TV. Email Address: [email protected] Contact Us: 0200818719
@@MyGhanamedia2
Previous Majority Leader To Ghanaians : ‘Beware Of NDC’s Lies’
Next “Religion Is A Force For Unity, Not A Force For Division” – Dr Bawumia Tells Ghanaians