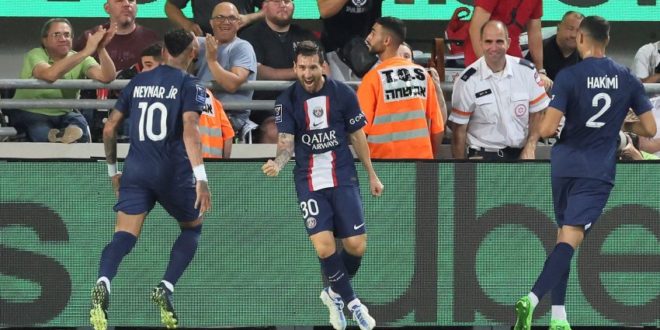 The reigning Ligue 1 champions were dominant from start to finish and Lionel Messi gave perhaps his best performance yet in a PSG shirt.

Despite PSG racking up 85% possession, Nantes had the two best chances in the opening 20 minutes with Ludovic Blas and Moses Simon going close, but there was no surprise when Lionel Messi opened the scoring.

Messi had been at the heart of every PSG attack and on 22 minutes, Neymar drifted in off the left and looked for his ex-Barcelona team mate with a through ball. The Brazilian’s pass took a kind deflection into Messi’s path and the Argentinian raced into the box, rounding goalkeeper Alban Lafont before hammering his right-footed shot into the empty net.

PSG continued to dominate and the Messi-Neymar connection produced some delightful interplay but it was still only 1-0 until moments before half-time.

When Moussa Sissoko clattered Neymar on the edge of the box, the Brazilian stepped up to take the resulting free kick and delivered an unstoppable strike to double PSG’s lead.

Sergio Ramos made it 3-0 with a back-heeled finish from close range after Verratti chipped it to Pablo Sarabia.

Messi sparked a late counter which ended with Neymar being rugby tackled and awarded a penalty which he impudently dispatched for 4-0.

Nantes defender Jean-Charles Castelletto was also sent off in the same incident.

Even at 4-0 up, PSG continued to attack with energy and numbers. Messi went close to a fifth with a cheeky chip, while Neymar also looked likely to add another before full-time.

In the end, PSG had to settle for a 4-0 win, and a trophy to start the new season.