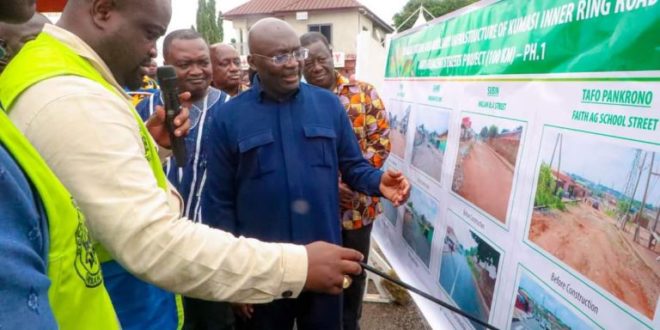 The Vice President of Ghana, Dr Mahamudu Bawumia today commissioned the 100km of urban roads across six metropolitan and municipalities under the Kumasi City Inner Roads project in the Ashanti Region.

The Vice President spread the first shovel of sand to signal the beginning of construction works on the 145 different roads for a total of 100km rehabilitation and auxiliary infrastructure of Kumasi Inner Ring Road and Adjacent Streets Project – Phase 1, for which he cut sod on December 13, 2019 at Kentenkrono in the Oforikrom Municipality.

Construction of the Kumasi Inner City roads is part of the Sinohydro Master Project Support Agreement (MPSA), signed in 2018 between the Government of Ghana and the Peoples Republic of China, through Sinohydro Construction to address the severe infrastructure deficit in the country. Under Phase 1 of the Agreement, a total of 441km of roads and two interchanges are to be constructed in Lots.

The new road works complement ongoing construction being undertaken in Kumasi by Contracta UK, captured under the Rehabilitation and Auxiliary Infrastructure of Kumasi Inner Ring Road and Adjacent Streets – Phase 1.

Speaking at the commissioning held on Monday August 1, 2022, the Vice President emphasized that currently a lot of road works are at various stages of completion in the region and government intends to ensure that they are all completed.

He also indicated that Parliament has approved the construction of the Suame Interchange- Phase1, saying that “Works are expected to start by September 2022 on Boankra Inland Port. I am informed that the contractor will start work this month and were on site this morning.”

Dr. Bawumia expressed the government’s commitment to continuing to improve road infrastructure in the region and Ghana as a whole.

Other road projects being undertaken within Kumasi, as well as the Ashanti Region, include the completion of asphalt overlay of 227 km of roads in Kumasi and the Ashanti Region; the Kumasi Roads and Drainage Extension Project, which includes the upgrading of the Lake Road into a dual carriageway and the lining of the Sissai Stream for 2km.

The reconstruction of the 30km Anwiankwanta-Obuasi Road is 85% complete while the upgrading of the Dompoase-Aputuogya Road is 80% complete, the Vice President disclosed.

“In addition to the Kumasi Inner City Roads, other projects under Phase 1 of the MPSA that are at various stages of completion include Construction of the PTC Interchange in Takoradi, which is the first interchange in the western parts of our country; and upgrading of selected urban roads in Sunyani and Berekum Inner City Roads.

“Others are the upgrading of selected Feeder roads in Ashanti and Western Regions, which has been substantially completed and commissioned.

“These projects, which are financed and executed under this Sinohydro Agreement, will go a long way in enhancing intra-urban, regional and national traffic flows. It would also strengthen regional economic integration through trade and reduce the cost of doing business in our dear nation, Ghana.

“These and other several infrastructure development activities such as the construction, rehabilitation, reconstruction, and upgrading of roads as well as bridges and interchanges, undertaken by this Government, also highlights the vision of His Excellency the President in addressing the road infrastructure needs of our country.”

The Minister for Roads and Highways, Kwasi Amoako Atta, assured residents that government is working hard to construct more roads in the Ashanti Region.

I'm Adwenpa-Hene |Blogger & Broadcaster Journalist. I am the CEO and manager of this noble website. I publish on Entertainment, Sports, Politics, Lifestyle, and Technology. You can also follow Us on : YouTube Channel - My Ghana Media TV, Facebook - MyghanaMedia TV , Twitter - @MyGhanamedia2 & Instagram - My Ghana Media TV. Email Address: [email protected] Contact Us: 0200818719
@@MyGhanamedia2
Previous KNUST Students Demand Resignation Of SRC President Over Corruption Allegations
Next GAF Arrests Intruder Who Was In The Process Of Breaching Fencing Of Ammunition Depot