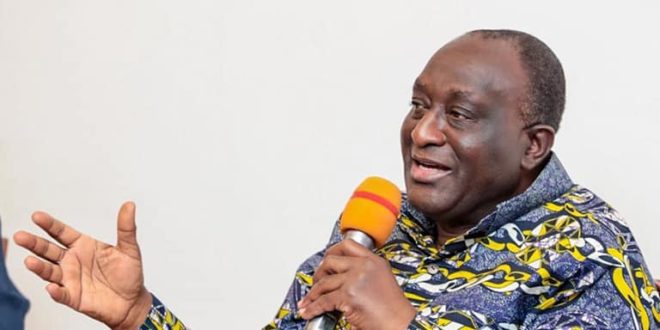 Pressure Mounts On Alan Kyerematen To Resign As Trade Minister

Supporters of the Minister for Trade and Industry, Alan Kwadwo Kyerematen are mounting serious pressure on him to resign from the government to pursue his presidential ambition.

The supporters who are based in Kumasi in the Ashanti Region have given the Minister by the end of September 2022 to resign and pursue his presidential dream to lead the New Patriotic Party (NPP) into the 2024 general elections.

One of the leaders of the group, Abraham Boadi, popularly known as ‘Opooman’, a former Assembly man in KMA speaking on Kumasi-based Abusua FM revealed that they will resort to the use of brute force to prevail on the minister to resign if he fails to voluntarily resign by the end of the ultimatum.

“We will start arranging for buses from September 15 to besiege the Trade Ministry if we don’t hear anything about his resignation.

“On October 1, if he still remains at post, we’ll storm the Trade Ministry with about 50 buses from Kumasi to go and lock the Ministry in order to force him to resign unless he assault us with well built men.”

Opooman was of the view that Mr. Kyerematen is the most suitable person to succeed President Nana Addo Dankwa Akufo-Addo as president on the NPP’s ticket in 2024.

As a result, he wants Mr. Kyerematen to hit the ground running with vigorous political campaign now so that his presidential ambition will become a reality.

I'm Adwenpa-Hene |Blogger & Broadcaster Journalist. I am the CEO and manager of this noble website. I publish on Entertainment, Sports, Politics, Lifestyle, and Technology. You can also follow Us on : YouTube Channel - My Ghana Media TV, Facebook - MyghanaMedia TV , Twitter - @MyGhanamedia2 & Instagram - My Ghana Media TV. Email Address: [email protected] Contact Us: 0200818719
@@MyGhanamedia2
Previous Not Every Ghanaian Can Get Ghana Cards By Sept. 30 – NIA Boss
Next Stop collecting Illegal Money For End of Term Exam – GES cautions Heads Of Schools