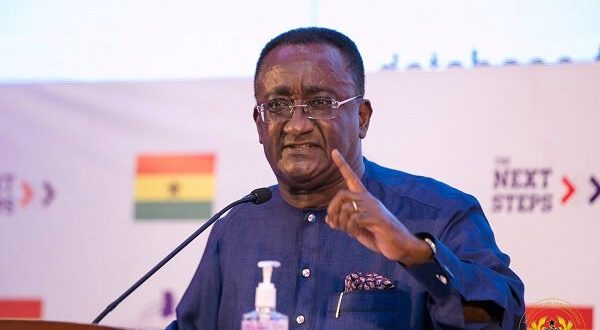 The Minister of Food and Agriculture, Dr Owusu Afriyie Akoto, has blamed the high cost of some food items especially in Ghana’s major cities on profiteering.

He stated that people go to the producing areas to purchase, for example, a basket of tomatoes for ¢150 and then shoot the sales price up to around ¢400 in the cities.

Clearly, there is some profiteering going, he said on the Ghana Tonight Show on TV3 with host Alfred Ocansey.

“The problem that we are facing about high cost of food is nothing to do with the shortage of food in the markets. You go to the producing areas, you will see exactly what I am talking about, I am just coming back five weeks ago, there is plenty of stocks and maize not even for this year, this year’s harvest is yet to come, we are talking of leftover last year’s crops.

See also  Every Student In Primary 4 To Write a National Standardised Test This Year – Dr. Adutwum

“The issue is, you go and buy a basket of let’s say ¢150 of tomatoes, and then it comes to Kumasi and suddenly becomes ¢400, so there is some profiteering going on.”

He further indicated that citizens of some neighbouring West African (W/A) countries are trooping to Ghana to buy foods due to the success of the Planting for Food and Jobs (PF&J) initiative.

Dr Afrityie Akoto said that whereas others are going hungry in their home countries due to food shortage, Ghanaians and other residents in Ghana are not experiencing same due to the abundance of foods as a result of the PF&J.

“Without Planting for Food and Jobs we’ll be going as hungry as our neighbours around West Africa who are now coming to Ghana as the bread basket to pick our surpluses to the point that we even had to limit it by saying we are temporary banning export of our produce to the neighbouring countries,” he said.

“Of course other west African countries are going hungry that’s why they’re coming to Ghana to pick our food. Our surpluses and you’ll just have to travel to Ejura and other places to see those days the number plates of trucks crisscrossing Ghana, picking up surpluses to feed their own countries.

“As far as Kano in Nigeria, they were coming here to buy our rice,” he stressed.

Planting for Food and Jobs is a flagship agricultural Campaign of the Akufo-Addo-led government, with five (5) implementation modules.

This module was officially launched by President Nana Addo Dankwa Akufo Addo at Goaso on April 19, 2017 in the then Brong Ahafo Region.

Tags High Prices Of Food Minister of Food and Agriculture