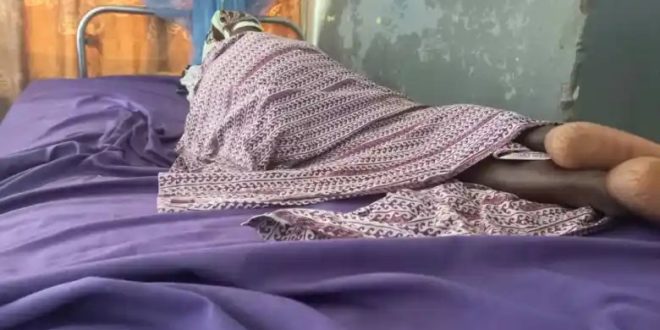 A 32-year-old married woman living in the Navrongo Municipality of the Upper East Region has been left in great pain and trauma after she was robbed, stabbed and raped.

The victim (name withheld), who can barely stand on her feet now at the Navrongo War Memorial Hospital, had left home at dawn on Monday 1 August to assist her mistress with her porridge-making business when a man attacked and raped her.

She said her attacker had been hiding in a thicket near the road. He pounced on her, held her at knifepoint and punched her continuously until he overpowered her.

The incident happened in Gongnia, behind the C K Tedam University of Technology and Applied Sciences, where the victim lives with her husband.

The alleged culprit, who has since been identified as Kwame Abass (aka “Presido”), is also a resident of the area and lives with his family in a rented flat.
Choosy about phones

Speaking to Asaase News’s Senyalah Castro from her sickbed in hospital, the victim said her attacker first demanded her mobile phone and every pesewa on her, which she surrendered to him after resisting briefly.

She said the attacker, who seemed dissatisfied with the brand of her mobile phone and her inability to produce the sum of money he demanded, began to strangle her. He then stabbed her in the ear and thighs, dragged her into a thicket and eventually raped her.

The victim said the attacker bolted into the thicket after the act.

A pastor who was passing by much later heard her cries and helped her back home.

Her husband, who was still at home, immediately took her to the War Memorial Hospital, where she has since been receiving treatment.
Attacked with a cutlass

As the woman fights for her life, her family and husband are fighting for justice.

“I was going to work on Monday early dawn around 4am,” said the tearful victim, recounting her ordeal. “Behind UDS [the University for Development Studies, now C K Tedam University], there are some teaks there, so the guy was hiding there.

“When I got there, he attacked me with a cutlass. I tried to escape. I ran and he kicked me down. He hit me with the cutlass and I struggled and fought with him. I shouted, but no one came to help.

“He pressed my neck against the ground and he pulled me into the bushes and he raped me,” the distressed woman said.

In the heat of the struggle between victim and attacker, both of them lost their sandals.

The following morning, a family friend of the victim who had heard about the incident visited the scene and was able to retrieve some sandals. Among the discarded shoes was one piece of footwear belonging to the alleged attacker. Family members of the woman in hospital believe he forgot to retrieve it as he fled from the scene.

The family launched an investigation, using the footwear. Through that sandal, a family friend who had gone to the scene of the incident earlier was able to identify the alleged attacker, through a junior brother of the attacker who identified the shoe.

See also  2022 Spelling Bee: 3 Spellers To Represent Ghana In US Finals In May

Coincidentally, reports say that Abass had also asked his junior brother to go and fetch his sandal from the scene that same morning.

The alleged attacker’s family denied access to him and denied that he had been involved in any wrongdoing. They tried to keep people away but the police were called in and he was arrested. Officers launched an investigation.
Suspect missing from cells

Police personnel from Navrongo Municipal Police Station, where the victim’s husband had lodged a complaint, effected the suspect’s arrest. He was placed in custody and investigations began immediately.

Around 4pm on the same day as the attack, the police investigator handling the case called the complainant to inform him that the suspect had escaped from custody.

According to Kamboe Samson, the victim’s husband, the police investigator declined to give further details of the escape when pressed for more information.

“The guy [the alleged attacker] was arrested around 9am the morning after I went to the police station in Navrongo to report the issue,” Samson said. “Then around 4pm, the Police CID called me and said the guy escaped. Now, we wonder why and how the guy escaped.”

Caesar Ananga, the assemblyman for the Gongnia Electoral Area, who has been at the forefront of investigations into the attack, described the news of the suspect’s escape as worrying, but said the victim’s family would press for justice regardless.

The assemblyman urged the police to do everything within their means to apprehend the suspect, as he could pose a threat to the victim’s family and community members who supported his arrest.

Search on for suspect

When reporters contacted the Navrongo Police, the municipal commander, Assistant Superintendent of Police Kingsley Kanda, confirmed that the case was being handled by his station. However, he would not speak further on the matter.

But a deep-throat source has told Asaase News that the suspect absconded as soon as he was let out of cells and led into a room for questioning.

The source blamed negligence on the part of the personnel on duty for the suspect’s escape.

The source said that the police officers on duty on the day of the escape have since been given ten days to produce the suspect, or face disciplinary action.

Meanwhile, Asaase News has learned that youths in the Gongnia community are warming up to hit the streets of Navrongo to protest against police officials, whom they accuse of a “lack of professionalism and seriousness” leading to the escape of the rape suspect.