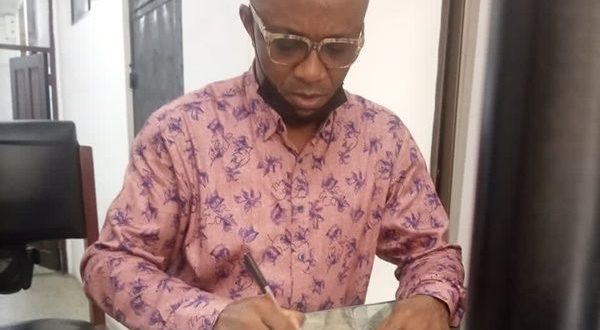 The Economic and Organized Crime Office (EOCO) has detained a notorious leader of a fraudulent enterprise operating in Ghana and neighboring Nigeria who is also on the wanted list of Interpol for various organized crimes.

The accused, between January 2017 and May 2022, used forged documents including an Export Declaration Form from the Customs Division of the Ghana Revenue Authority (GRA) to obtain various sums of money totaling Six Million, Five Hundred Thousand United States Dollars ($6,500,000) from one Mazen Farakh, the complainant, under the pretext of exporting teak wood from Ghana to him in Ukraine.

The accused was arraigned before Her Ladyship Elfreda Dankyi at Criminal Court 2 of the High Court, Accra. After the accused person’s plea was taken, EOCO’s legal team prosecuting on behalf of the Republic, prayed the court to take into consideration the amount involved in the offence allegedly committed in granting bail.

The accused is to surrender his passport and other travelling documents and to report twice a week to the EOCO headquarters.

However, Sunny Awamini is yet to settle the bail conditions and has been detained.

According to deep throat sources at EOCO, the suspect met Mazen Farakh in December 2018 during which the latter expressed interest in purchasing expensive wood (teak).

Sam after receiving the sum of $6.5 million from the Ukrainian businessman sent photographs of fake pallets of teak stored in custom bonded warehouses and promised to get the goods delivered to Ukraine.

Sunny Awamini alias Sam is apparently a wanted man by interpol and Nigeria security apparatus having been in the hunt for him for several years.

EOCO after doing a diligent work sought collaboration from their Nigerian counterparts and were informed that Sam has been a wanted man and operates a criminal gang of fraudulent enterprise in Nigeria for a very long time.

I'm Adwenpa-Hene |Blogger & Broadcaster Journalist. I am the CEO and manager of this noble website. I publish on Entertainment, Sports, Politics, Lifestyle, and Technology. You can also follow Us on : YouTube Channel - My Ghana Media TV, Facebook - MyghanaMedia TV , Twitter - @MyGhanamedia2 & Instagram - My Ghana Media TV. Email Address: [email protected] Contact Us: 0200818719
@@MyGhanamedia2
Previous GPA To Children Of Couple Found Dead In Their Home: We Will Provide The Best Of Psycho-Social Support
Next 45% Of SHS Students Brush Their Teeth For Only 30 Seconds – KNUST Research Reveals