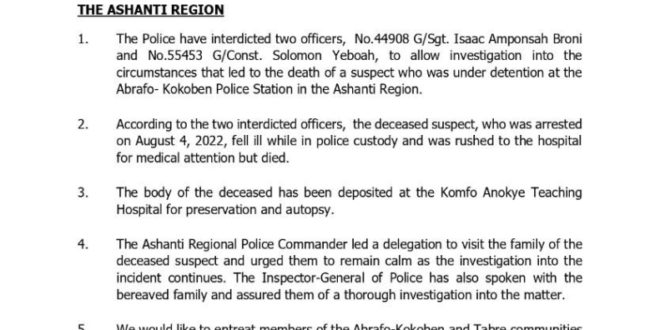 The Ghana Police Service has interdicted two of its officers over the death of a suspect in a cell at the Abrafo-Kokoben Police Station in the Ashanti Region.

The interdiction of the officers, No.44908 G/Sgt. Isaac Amponsah Broni and No.55453 G/Const. Solomon Yeboah is, “to allow investigation into the circumstances that led to the death of a suspect who was under detention.”

A statement signed by the Assistant Superintendent of Police, Public Affairs Officer, Godwin Ahianyo, noted that the officers claimed: “the deceased suspect, who was arrested on August 4, 2022, fell ill while in Police custody and was rushed to the hospital for medical attention but died.”

The statement added that “the body of the deceased has been deposited at the Komfo Anokye Teaching Hospital for preservation and autopsy.”

In the meantime, the Ashanti Regional Police Commander has led a delegation to visit the family of the deceased suspect and urged them to remain calm as the investigation into the incident continues.

“The Inspector-General of Police has also spoken with the bereaved family and assured them of a thorough investigation into the matter,” part of the statement noted.

The Police entreated members of the Abrafo-Kokoben and Tabre communities to remain calm as investigation continues to unravel the truth of the matter.

I'm Adwenpa-Hene |Blogger & Broadcaster Journalist. I am the CEO and manager of this noble website. I publish on Entertainment, Sports, Politics, Lifestyle, and Technology. You can also follow Us on : YouTube Channel - My Ghana Media TV, Facebook - MyghanaMedia TV , Twitter - @MyGhanamedia2 & Instagram - My Ghana Media TV. Email Address: [email protected] Contact Us: 0200818719
@@MyGhanamedia2
Previous GNFS Sacks 11 Of Its Personnel For Recruitment Fraud, Others
Next Mensah Sarbah And Commonwealth Hall Clash: Persons Found Culpable Will Be Sanctioned – UG Management