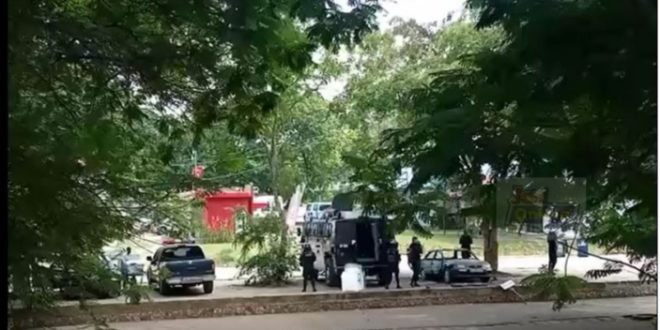 Personnel from the Ghana Police Service have been deployed to the University of Ghana campus following a clash between students of Commonwealth and Mensah Sarbah Halls.

Even though the incident happened on Friday, the presence of the personnel is to ensure that calm is restored on campus for academic work to proceed without interruptions.

An inter-hall fight ensued between the residents of the Commonwealth and John Mensah Sarbah halls of the University of Ghana resulting in injuries and damage to properties.

Narrating the incident to myjoyonline.com, an eyewitness who pleaded anonymity said residents of Sarbah Hall celebrated ‘Sarbahfest’ on Friday.

Somehow, one of them strayed to the Commonwealth Hall, where he was allegedly beaten up and his phone taken away.

In the process, a vehicle parked at the Mensah Sarbah Hall car park was set ablaze.

“Besides burning the car, they came to fight, destroyed a lot of things and took away one of the statues at the Sarbah Hall,” the source said.

Residents of Commonwealth Hall are known as Vandals and Sarbah Hall residents are also called Vikings.

Reports say it took the timely intervention of the Police to quell the riot.

Meanwhile, the Management of the University of Ghana has said that persons found culpable in the acts of violence on the University’s campus will be sanctioned appropriately.

According to the Management, efforts are underway to identify the perpetrators.