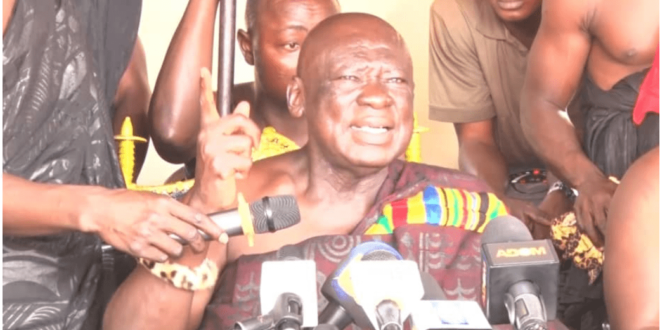 The Mampongten Hene in the Kwabre East Municipality of the Ashanti Region, Barima Saasi Ayeboafo II, is livid with the state of development in the area.

The chief at a press conference together with indigenes have expressed discontent over systemic discontinuation of development projects initiated in Mampongten to bring it to a status fitting a municipality.

The chief who described, the area as the voting capital of the ruling NPP world bank has suffered neglect by the current administration and successive governments.

He laments the Kwabre East constituency which is in Mampongten can not boast of a single tarred road nor proper infrastructure in spite of its relevance in the geopolitics of the Ashanti region.

The neglect of the Fawade , Keanyase junction road which is fundamental to easing perennial major traffic on the Tafo actuarial roads and strategic to open up the place for development remains a major issue for concern’’

Barima Saasi Ayeboafo II is worried the continuous neglect is deliberate as countless appeal to the current government has fallen on deaf ears.

He says with the area lacking a major health facility he was surprised; the area was denied one of governments agenda 111 hospital projects which he believes the Mampongten area qualifies and deserve same.

‘‘the agenda 111 policy neglect, institutional inertia against the background of not a single purpose state hospital in Mampongten the municipal capital, is the last straw which has triggered this petition release and subsequent resolution by the chiefs and people of mampongten’’

‘‘what is more worrisome is that Kwabre east constituency which posted the highest votes in both the 2016 and 2020 elections in the whole of Ashanti Region has been totally neglected for the past 35years, a clear case of the goose that lay the golden eggs for the ruling party ‘’

‘‘we demand the needed attention from the president and his government to changes this poor narrative about Kwabre which is threatening its basic survival with infrastructure development’’ he said.

The chief has, however, warned of dire consequences if government fails to focus its developmental agenda in Mampongten.

Yet again infrastructure development has been a huge concern for various youth groups in the Ashanti region, the latest is this action by the Chiefs and people of Mampongten.

Our reliable source  can confirm construction works on a 5.5-kilometre Mamponteng town road network which began in the early part of 2020 was abandoned a few months later, leaving uncovered dugouts, thereby worsening the condition of the road network, and endangering the lives of the residents.

It is not clear what could have led the contractor to abandon the project, but it is rumored that construction works were abruptly stopped after money meant to be paid to the construction firm for works to continue was allegedly embezzled.

Residents have blamed the poor state of infrastructural development in Mamponteng on past and present political leaders in the area, especially Members of Parliament and Municipal Chief Executives.

In her recent meeting with the chief of Mamponteng, the current MP for the area, Francisca Oteng-Mensah, promised to bring more developmental projects to the constituency in her second term.

She assured the chiefs her preparedness to bring home the constituency’s fair share of national cake, adding that all she needed was the total support of the traditional leaders.

See also  Alan Kyerematen: The Outcome Of Delegates Conference Is A Win For NPP In 2024 Polls

Francisca Oteng-Mensah assured Barima Saasi Ayeboafo II and his people of her readiness to ensure that construction works resumed on the Mamponteng town roads.

The MP also promised to complete the Mampongten market which has been abandoned over decades, disclosing that talks were far advanced to restart the project.

All the promise made by the MP, has not materialized since the last visit of the Mampongten Hene , Barima Saasi Ayeboafo II.

play the audio below for more details