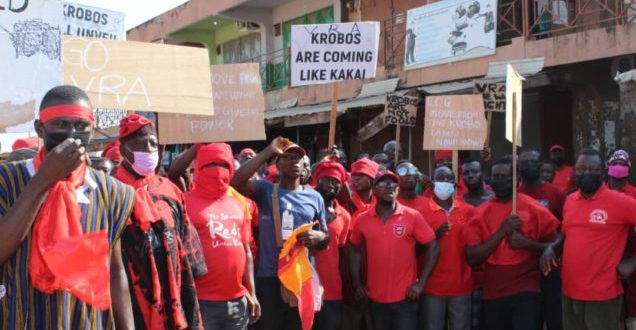 Yilo Krobo MCE: We Are Afraid Of Being Attacked By Krobo Youth

The Municipal Chief Executive for Yilo Krobo, Mr Eric Tetteh has expressed concern over the behaviour of the youth in the Lower Manya Krobo Municipality.

Hundreds of youth groups from five communities in the Lower Manya Krobo Municipality took to the streets to protest the ongoing installation of prepaid meters by the Electricity Company of Ghana (ECG).

Their outrage comes after the ECG began a mass installation of prepaid meters with the assistance of some military and police personnel as part of a roadmap to improve the company’s revenue generation in the Krobo enclave, following a misunderstanding between residents and the power distribution company over alleged over-billing.

According to Mr Eric Tetteh, the behavior of the youth has forced him and his colleague Lower Manya Krobo MCE, Simon Tetteh out of their residences.

“In fact, my colleague in Lower Manya is unable to even stay in his residence,” he stated.

This, he said is because they are afraid of being attacked by the irate youth.

“What is very painful is that those of us who are championing this cause like the Chiefs and we the MCEs are being attacked by this youth here and there…all because there is this fight against ECG because there was over-billing. So I want the record to be set straight that Krobo’s have never said that we will not pay light bills. The youth who were agitating do not represent the views of Krobo – Krobo’s are good people.”

In a related development, prepaid meters installed at the residence of the Member of Parliament (MP) for Lower Manya Krobo, Ebenezer Tei Larbi, are said to be missing.

According to reports, the individuals who removed the meter are unknown.

Mr. Tei Larbi said the meter was installed on his premises on Saturday after which he loaded it with GHC250 worth of credit. However, the device is nowhere to be found.

See also  We Are Struggling To Survive – ECG, GWCL

“I have heard that my residence has been disconnected but the fact is that the ECG had installed prepaid meters in my house which I did not kick against because I have always indicated that we would be paying our bills, the only thing that I have objected is the presence of the soldiers.

“So the meter was installed on Saturday and I left there Sunday evening for a meeting in Accra on Monday. I had credit on it, I had 250 worth of credit … so there is no reason that I will do an illegal connection,” he stressed.

The MP said the case has been reported to the Police.

“It was only yesterday that they reported to the Police, so I am yet to go there myself. But I am sure they are doing their own investigation. I suspect foul play,” he said.

Also confirming the incident, the Managing Director of the Electricity Company of Ghana, Mr. Mahama, said those who removed the meters connected the wires. The ECG boss further described the development as unfortunate.

According to him, ECG staff are unable to act because they are afraid of being beaten by residents.

He noted that as a result of these developments, ECG is “carrying out a policy and we feel this is an area where it will be difficult for us to even read meters so the easiest way will be to use IT through smart meters to monitor the meters from afar, somebody tampers with the meters we will come and see you.”

I'm Adwenpa-Hene |Blogger & Broadcaster Journalist. I am the CEO and manager of this noble website. I publish on Entertainment, Sports, Politics, Lifestyle, and Technology. You can also follow Us on : YouTube Channel - My Ghana Media TV, Facebook - MyghanaMedia TV , Twitter - @MyGhanamedia2 & Instagram - My Ghana Media TV. Email Address: [email protected] Contact Us: 0200818719
@@MyGhanamedia2
Previous IGP : Qualified Family Members To Replace Police Officers Who Die In Line Of Duty
Next AGI : Bulk Importers To Be One Of The Hardest Hit By Ghana’s Poor Credit Ratings