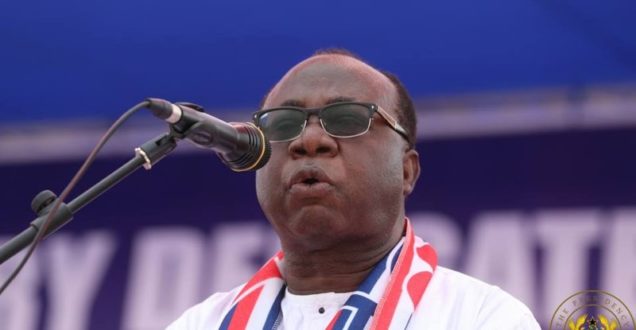 The embattled MP is awaiting a ruling by the Speaker of Parliament as to whether or not her seat should be declared vacant over prolonged unauthorized absenteeism.

She has not attended Parliamentary business since December 2021 when she travelled to the United States.

But speaking on The Big Bulletin on Asaase Radio, Mr. Freddie Blay said the  Member of Parliament for the Dome Kwabenya Constituency of the Greater Accra Region,  Sarah Adwoa Safo deserves a fair hearing before Parliament takes any decision on her long absence from the chamber.

“It is not easy that people have elected an individual and she’s in Parliament,” he said

“It is, according to the rules in Parliament, but there’s one cardinal rule that’s beyond Parliament. It is even beyond the constitution, you need to give her a hearing. That hasn’t been done from what I gather.”

Blay is advancing this argument which critics have shot down explaining that the Privileges Committee of Parliament tried to reach her through multiple channels to explain her absence but she failed to take advantage of their work.

“She’s been out of the country for health reasons or whatever reasons, I can’t tell. But I’m saying that if she’s given the opportunity to avail herself and make her case then based on that one could pass judgement.”

“You cannot just say that you want to remove someone from her seat when you have not heard her. As a lawyer, it is not right and I will not agree with this stance.”

Like the Minority Caucus, Blay insists that the MP be given a hearing based on which a determination can be made on the status of her seat in the lawmaking chamber.

Bagbin deferred the ruling on the final day of the last sitting stating that he wanted to consult the ‘old lady’ and to be able to deliver a detailed ruling on the issue.

The Minority doesn’t want her removed till she is given a hearing but the Majority wants her axed immediately.

Adwoa Safo formally wrote this week to the President to communicate her acceptance of her dismissal as the Minister of Gender, Children and Social Protection.

In a letter dated August 5, Sarah Adwoa Safo indicated that the revocation of her ministerial appointment will afford her the opportunity to focus more on the developmental needs of her constituents.

She wrote in her letter that she is “cognizant of my duties to the 75,000 constituents who elected me…”

“…this development is opportune and will afford me more time to concentrate on my Parliamentary responsibilities and Constituency engagements as well as consolidate the gains we have made as a government at the Constituency level in our quest to break the eight,” the statement added.

Sarah Adwoa Safo, however, expressed gratitude to the Presidency for the opportunity to work at the Ministry of Gender, Children and Social Protection.

I'm Adwenpa-Hene |Blogger & Broadcaster Journalist. I am the CEO and manager of this noble website. I publish on Entertainment, Sports, Politics, Lifestyle, and Technology. You can also follow Us on : YouTube Channel - My Ghana Media TV, Facebook - MyghanaMedia TV , Twitter - @MyGhanamedia2 & Instagram - My Ghana Media TV. Email Address: [email protected] Contact Us: 0200818719
@@MyGhanamedia2
Previous It Is Not Our Intent To Train Criminals – Owass Headmaster
Next State Still Pursuing NAM1’s Case – John Kumah