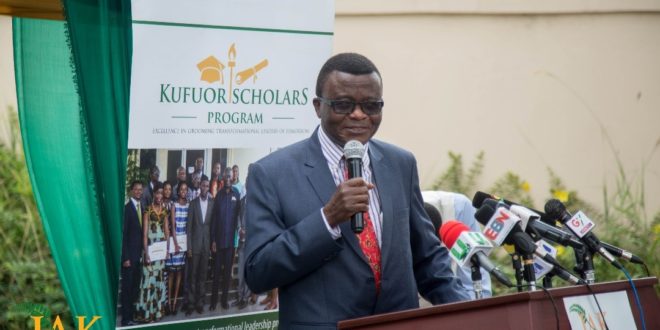 Kufuor Foundation: NPP, NDC Have Failed To Work On Fundamentals Of Economy

The Chief Executive Officer of John Agyekum Kufuor Foundation (JAK), Prof. Baffour Agyemang-Duah,  has revealed that Ghana is where it is today because the two main political parties in the country namely National Democratic Congress (NDC) and the governing New Patriotic Party (NPP) have failed to touch the fundamentals of the economy.

He explained that the colonial masters when leaving the country in the early 1950s structured the economy to favour them.

He, however, noted that it was only the governments of the late Dr. Kwame Nkrumah and his Convention People’s Party and the late Gen. Kutu Acheampong and his Supreme Military Council (SMC) that were the governments that were able to touch the fundamentals of the country’s economy.

“Aside from these two governments, no subsequent government has been able to touch the fundamentals of the economy,” he stressed.

He said the way the country’s economy has been structured by the colonial masters is the bane of the dwindling economic fortunes over the years.

Prof. Agyemang-Duah made this revelation in an interview with Mr. Emmanuel Quarshie, the host of the Ghana Yensom morning show on Accra 100.5 FM on Monday, August 22, 2022.

He was of the view that the two main political parties have each governed this country for 16 years yet no change has been seen in the fundamentals of the economy.

According to him, until the country unties the strings of neo-colonialism in the management of the economy, the country will continue to be where it is today.

He said the strengths of every country are its natural resources and human resources, adding that Ghana has both but its people continue to wallow in abject poverty.

He said a country like Japan had no natural resources but used human resources to get to where it is today.

He noted that Ghana needs a new orientation which he said must begin with education at the kindergarten level.