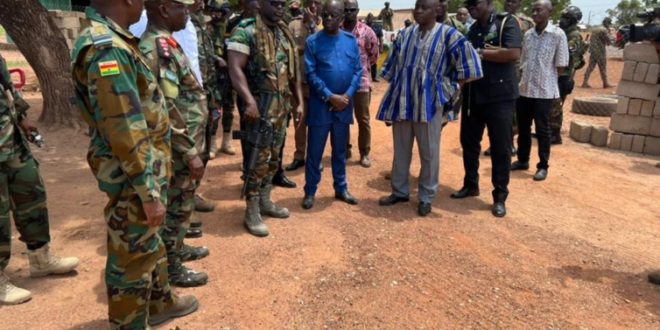 President Akufo-Addo Tightens Up Security At Borders With ‘Standby Force’

The President of Ghana Nana Akufo-Addo has announced the deployment of additional resources to Ghana’s border with Burkina Faso in order to prevent the country from becoming a battleground for terrorist activities.

He also announced the formation of a “standby force” to fight the insurgencies.

According to President Akufo-Addo, only a strong collaboration between citizens and security agencies can help defeat insurgents who have prioritised Ghana as the next target for attacks hence the move.

“But even within our limited means, the standby force is being created. The various nations that I’ve mentioned to be able to also give us some robust capacity to meet the terrorists. That is the major security preoccupation for all of us along the coasts.

“It is better for us to spend limited amount of money we have now defending ourselves against the penetration rather than allowing it to take foot and then, of course, you’re involved in the huge expenditures and huge damage to the population and to the economy, etc.,” he explained.

The President made this comment while addressing a visiting United States of America Congress Committee on Foreign Relations visiting some African countries.

President Akufo-Addo also identified the source of the terrorist influx into the West African region.

According to him, after the death of Gadaffi, the terrorists “crossed the Sahara, and found refuge in the northern parts of Mali that’s over many 10 years ago, and since then, they’ve been systematically waging a war in Mali which is now spread across the entire Sahara –Niger, Burkina Faso, and is now also come southwards.”

See also  No Textbooks: You Are Being Irresponsible Towards The Ghanaian Child – President Akufo-Addo Told

I'm Adwenpa-Hene |Blogger & Broadcaster Journalist. I am the CEO and manager of this noble website. I publish on Entertainment, Sports, Politics, Lifestyle, and Technology. You can also follow Us on : YouTube Channel - My Ghana Media TV, Facebook - MyghanaMedia TV , Twitter - @MyGhanamedia2 & Instagram - My Ghana Media TV. Email Address: [email protected] Contact Us: 0200818719
@@MyGhanamedia2
Previous Odike To Kumasi Traditional Council: Nullify Banishment Before I Can Come And Apologise
Next Atiwa East Youth Wing Congratulates Kwabena Frimpong On His Appointment As NPP Deputy Director Of Protocols