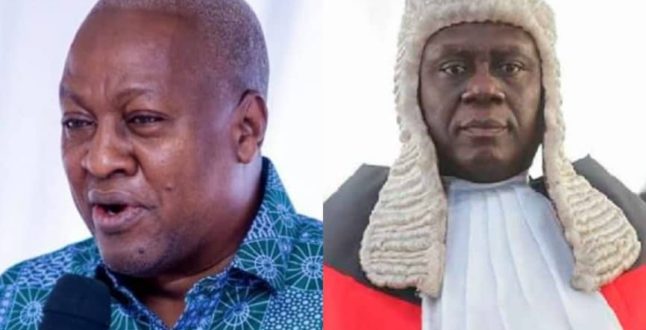 Ghana’s former President, John Dramani Mahama says it will take a new Chief Justice to repair the ‘broken image’ of the Judiciary.

According to him, the current leadership of the Judiciary lacks what it takes to redeem its sunken image, hence the need for a new Chief Justice.

Addressing a gathering at the NDC’s Lawyers’ Conference on Sunday, Mr Mahama explained that, a perceived independent Judiciary is a vital element in safeguarding the country’s democracy.

He however noted that, the current Judiciary has become an item of ridicule and mistrust, and therefore the need for a new Chief Justice to restore public confidence in the courts.

“There is therefore the urgent need for the Ghanaian Judiciary to work to win the trust and confidence of the citizenry, and erase the widely held perception of hostility and political bias in legal proceedings at the highest courts of the land.

Unfortunately, we have no hope that the current leadership of our Judiciary can lead such a process of change. We can only hope, that a new Chief Justice will lead the process to repair the broken image that our Judiciary has acquired over the last few years”, Mahama said.

See also  We Have Mollycoddled Corrupt  NDC Leaders For Long; We Must Start Jailing Them - Nana Oteatuoso Kokobeng II

Still on the Judiciary, he intimated that the public perception of bias on the part of the Judiciary, poses an ‘existential threat’ to the country’s democracy.

In his view, the fact that many citizens continue to ridicule the Judiciary as a ‘Unanimous FC’, is a problem which must be addressed.

“So badly has the image of our Judiciary deteriorated. That many of our citizenry openly make mockery of our justice system and of our justices. The phrase ‘Go to Court’ is these days met with derisive laughter, instead of hope that one will truly get justice”, Mr Mahama lamented.

He continued, “If people are not poking fun about politics and inducements being used to sway the hand of justice in the lower courts, then it is poking fun and making statements about the 7-0 of the ‘Unanimous FC’ “.

In recent times, the Judiciary has come under widespread criticism due to the unanimous nature of some of its rulings.

The unanimity in its judgements, has subsequently being perceived by a section of the public as politically motivated.

This, Mr Mahama believes must be cured to preserve the integrity of the courts in the dispensation of justice.

In a related development, the former President also described the Akufo-Addo regime as ‘the greatest political scam in the 4th Republic’.

His assertions were based on the prevailing economic challenges in the country.

This, for Mr Mahama, is a proof of the incompetence of the Akufo-Addo and Mahama led administration.

He therefore reiterated the readiness of the NDC to better the situation in the future.

“Ghanaians are looking up to the NDC to restore hope and turn the fortunes of our motherland around from the pitiable state in which we currently find ourselves”, he added.

Play the audio below for more details

I'm Adwenpa-Hene |Blogger & Broadcaster Journalist. I am the CEO and manager of this noble website. I publish on Entertainment, Sports, Politics, Lifestyle, and Technology. You can also follow Us on : YouTube Channel - My Ghana Media TV, Facebook - MyghanaMedia TV , Twitter - @MyGhanamedia2 & Instagram - My Ghana Media TV. Email Address: [email protected] Contact Us: 0200818719
@@MyGhanamedia2
Previous You Were Too Weak – Gyampo Chides Oyerepa FM For Shutting Down
Next Lion kills Intruder At Accra Zoo