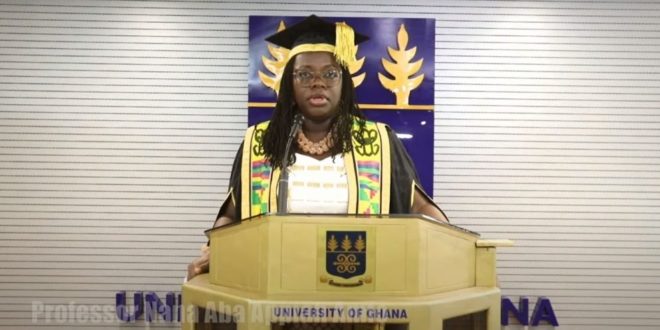 The Junior Common Room (JCR) of Commonwealth Hall is calling on the Council of the University of Ghana to call the Vice Chancellor, Professor Nana Aba Appiah Amfo, to order.

They claim since she took office, Prof Appiah Amfo has tacitly endorsed indiscipline and hooliganism exhibited by students of Mensah Sarbah Hall, her former hall of residence.

The suspicion of the JCR of Commonwealth Hall comes in the wake of a decision taken by the University Council following investigations into the August 5 clashes between Commonwealth Hall students, popularly known as Vandals, and their mates at Mensah Sarbah Hall who are called Vikings.

Among the decision was the interdiction of the Senior Tutor and Hall Master of Commonwealth Hall, much to the chagrin of students.

“The decision to relieve our Hall Master and Senior Tutor of their duties by the University Council could only be based on nothing but palpable falsehood fed it by the enemies of our Hall, who have demonstrated time without number, their abhorrence to the peaceful and disciplined nature of our Vandal fraternity,” the President of JCR said in an address on the issue.

“Once again, they have showcased their weakness by misleading UG Council, which is made up of highly respected men and women in society, who are led by no less a person but the revered retired Chief Justice of our country.”

According to the JCR of Commonwealth Hall, the violence on the night of Friday, August 5 was orchestrated by some elements within the top hierarchy of the university and the Vice Chancellor and the Pro-Vice Chancellor are aware of everything.

“We dare the Vice–Chancellor and the Pro–Vice–Chancellor (Academic and Student Affairs) to deny that they are not aware that the stolen bust of the legal luminary, John Mensah Sarbah is being kept at a secret location, which they have both accused students of Commonwealth Hall to have stolen.

“This long–held view of theirs to continuously denigrate our Hall out of envy and hatred has never stood the test of time, and we would like to assure them that it would not be this time that such ill– intended actions would stand.”

They want the suspended hall officials to be reinstated while calling for the immediate removal the Pro-Vice Chancellor “since he has shown gross incompetence in managing affairs of students in the University of Ghana”.

For the Vice Chancellor, they want her to be guided by the principles of justice, fairness, and good conscience in the discharge of her duties.

“In the alternative, if she cannot demonstrate that she is capable of exhibiting these qualities expected of a Vice–Chancellor, she should be made to step down for a more competent person to lead this University at this time.”

I'm Adwenpa-Hene |Blogger & Broadcaster Journalist. I am the CEO and manager of this noble website. I publish on Entertainment, Sports, Politics, Lifestyle, and Technology. You can also follow Us on : YouTube Channel - My Ghana Media TV, Facebook - MyghanaMedia TV , Twitter - @MyGhanamedia2 & Instagram - My Ghana Media TV. Email Address: myghanamedia[email protected] Contact Us: 0200818719
@@MyGhanamedia2
Previous Auditor-General’s Report: Corruption Swallows ¢1.8bn In 2021
Next Only 61 Out Of 360 Programmes Offered By KNUST Accredited – Auditor-General’s Report