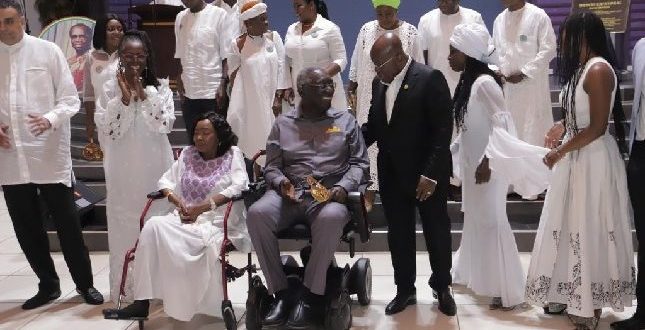 As a nationalist leader and Prime Minister, he helped to restore civilian government to the country following military rule.

At a book launch in Accra Monday evening, he described the man as a far-sighted think tank.

The audiobook was compiled by children of the late Dr. K.A. Busia titled “The Prof” A Heart of Faith, from “Poor Boy” to Prime Minister”.

President Akufo-Addo indicated that but for the overthrow of Busia in 1972, the story of Ghana’s rural development would have been different from what it is today.

“As the eldest child of my father, Edward Akufo-Addo, then President of the 2nd Republic, I had the privilege to witness at first hand his excellent leadership skills, his vision for the development of our country, and the sacrifices he made towards the creation of the free, democratic Ghana in which we now live”, he said.

He, therefore, noted that “as we celebrate his legacy, we commemorate also the 109th anniversary of his birth, the 44th anniversary of his death, and the 53rd anniversary of the famous victory of the Progress Party he led in the 1969 general elections. I dare say our nation, and indeed, Africa has not seen a more far-sighted political thinker tank like Professor Kofi Abrefa Busia.”

For President Akufo-Addo “the overthrow of the Second Republic and the Progress Party government meant that our country was deprived of the full impact of his agenda for development.”

“The case has gone to show that we turned out to be the poorer for it. We can imagine for example, where our nation would have been now if he had been allowed to develop his visionary programme of rural development”, he emphasised.

“Some of the ills of contemporary Ghana such as rural-urban migration which has been the source of much current social tension could well have been avoided”, he insisted.

The audiobook is a compilation of letters that Professor Kofi Abrefa Busia exchanged with his lifelong friend and mentor, Reverend William Whittle.

He was born in the traditional kingdom of Wenchi, in the then Brong Ahafo Region, one of the four Gold Coast Territories, then under British rule and now called Ghana.

He was educated at Methodist School, Wenchi, Mfantsipim School, Cape Coast, then at Wesley College, Kumasi, from 1931 to 1932.

The late Prime Minister taught at Wesley College and left to study at Achimota College in 1935 and taught there.

He gained his first degree with Honours in Medieval and Modern History from the University of London, through correspondence during this period.

e then went on to study at University College, Oxford, where he was the college’s first African student.

Busia returned to the Gold Coast in 1942.

He took a BA (Hons) in Philosophy, Politics, and Economics (1941, MA 1946) and a DPhil in Social Anthropology in 1947 at Nuffield College, Oxford, with a thesis entitled “The position of the chief in the modern political system of Ashanti: a study of the influence of contemporary social changes on Ashanti political institutions.” He was a Fulbright scholar in 1954.

He served as a District Commissioner from 1942 to 1949 and was appointed the first lecturer in African Studies.

In 1951, he was elected by the Ashanti Confederacy to the Legislative Council. In 1952, he was the Leader of the Ghana Congress Party, which later merged with the other opposition parties to form the United Party (UP).

As the leader of the opposition against Kwame Nkrumah, he fled the country because his life was under threat.

In 1959 Busia became a Professor of Sociology and Culture of Africa at the University of Leiden near the Hague, Netherlands.

He returned to Ghana in March 1966 after Nkrumah’s government was overthrown by the military to serve on the National Liberation Council of General Joseph Ankrah, the military head of state; and was appointed as the Chairman of the National Advisory Committee of the NLC.

In 1967/68, he served as the Chairman of the Centre for Civic Education.

He used this opportunity to promote himself as the next Leader.

Busia was also a Member of the Constitutional Review Committee. When the NLC lifted the ban on politics, Busia, together with Lawyer Sylvester Kofi Williams and friends in the defunct UP formed the Progress Party (PP).

This paved the way for him to become the next Prime Minister. Busia continued with NLC’s anti-Nkrumaist stance and adopted a liberalised economic system.

There was a mass deportation of half a million Nigerian citizens from Ghana, and a 44 percent devaluation of the cedi in 1971, which met with a lot of resistance from the public.

While he was in Britain for a medical check-up, the army under Colonel Ignatius Kutu Acheampong overthrew his government on 13 January 1972.

Busia remained in exile in England and returned to Oxford University, where he died from a heart attack in August 1978.

Along with J. B. Danquah and S. D. Dombo, Busia’s name is associated with Ghana’s right-wing political party, the NPP.

The New Patriotic Party (NPP) has claimed the Danquah-Busia-Dombo mantle in the Fourth Republic.

I'm Adwenpa-Hene |Blogger & Broadcaster Journalist. I am the CEO and manager of this noble website. I publish on Entertainment, Sports, Politics, Lifestyle, and Technology. You can also follow Us on : YouTube Channel - My Ghana Media TV, Facebook - MyghanaMedia TV , Twitter - @MyGhanamedia2 & Instagram - My Ghana Media TV. Email Address: [email protected] Contact Us: 0200818719
@@MyGhanamedia2
Previous Only 61 Out Of 360 Programmes Offered By KNUST Accredited – Auditor-General’s Report
Next Akufo-Addo Issues Charters To Methodist, Presby, Catholic Universities