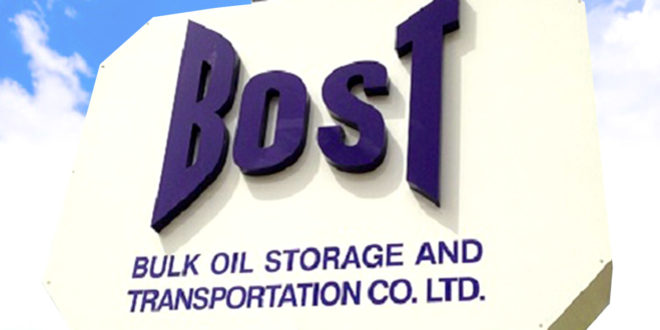 The Bulk Oil Storage and Transportation Company (BOST) has responded to the Auditor General’s Report as captured in its 2021 annual Report.

Observation noted. This could have been avoided if BOST was financially sound at the time. Sometime in 2014, BOST commenced negotiations in a bid to acquire 16 acres of land from Generation Investments Company Limited (GIC) for the development of Natural Gas Infrastructure at the cost of US$11,200,000.00.

Negotiations between the parties stalled until June 2016 when a settlement payment plan was finally brokered. By a pro forma invoice from GIC to BOST dated June 9, 2016, a three-tranche payment option was proposed. No specific dates or deadlines for the installment payments were indicated.

Total payments made in respect of the land stood at US$5,360,000.00 as at December 2016. Due to cash flow difficulties suffered by BOST, it could not meet its payment obligations in the manner in which it initially envisaged after making payment of almost fifty percent of the cost of the land. On September 20, 2018, when a demand notice was received from GIC’s lawyers for payment of the outstanding balance of US$5,840,000.00. BOST subsequently met with the lawyers to negotiate payment terms after which it formally proposed to pay the balance in eleven equal monthly installments of US$500,000.00 each from January 2019 with balance of US$340,000 to be paid in December 2019 in a letter dated December 21, 2018, due to its cash flow constraints.

Meanwhile, GIC had proceeded to file a writ for recovery of the sums on November 14, 2018. 677. GIC however, refused BOST’s payment proposal in a letter dated January 18, 2019, describing BOST’s proposal to be “low instalment amounts over a rather “long repayment period” and proposed terms which were onerous to BOST. Attempts at settlement failed as BOST could not meet the demands of GIC in the manner they were demanding. Due to its cash flow situation, it was compelled to seek a declaration for title of the portion of land commensurate with the payments made so far at the time of the suit among others. In the circumstances, the court was left to make a determination culminating in the judgment of November 6, 2020.

The staff who played the key roles leading to the situation are no more in the employment of BOST. As at January 1, 2022, BOST has made full payment of its obligation and we are in the process of getting the land transfer to BOST to use the land for the LPG project.

Sometime in July 2013, Hask Oil delivered petroleum products in BOST’s storage tanks in its normal course of business as with other BDCs. To ascertain the actual quantities of plaintiff’s stocks as well as the balances of the other BDCs in storage, BOST engaged Ernst & Young as external auditors to investigate and validate all BDC claims. It duly informed the BDCs including Hask about the audit, at the end of which it was established that the stock balances in favour of plaintiff to which it agreed was 34,143 litres of gasoline and 1,341,571 litres of gasoil.

On May 4, 2016, BOST released 74,824 litres of gas oil valued at GH¢109,886.15 as well as 2,350,225.42 litres of gasoline valued at GH¢3,755,648.47 to Hask at the prevailing value at the date of release. As far as BOST was concerned, the volumes of products were fully refunded to Hask Oil to cushion them against any shortfalls, and it owed it no further obligation. BOST position was that it was never a party to the credit facility Agreement concluded between Hask Oil and the bank and ought not to be liable for any costs associated with same.

Indeed, by the findings of a Product Loss Claims Committee set up to investigate BDC claims of products loss in BOST’s system, Hask Oil ought to have refunded the entire volume of 74,824 litres to BOST as same had been made available for lifting as far back as April 2014. By a Judgement dated 21st October 2019 the High Court found in favour of Hask and granted it all the reliefs as endorsed on its writ. Management has taken appropriate action by sanctioning the legal officer who was not present in court and had the appeal cancelled in favor of HASK Oil. The employee who was in charge of operation (B F Arthur) during the period was terminated.

On April 2, 2015, BOST received a demand notice from WAPCO dated March 19, 2015, to the effect that it was owed an amount of US$300,000.00 for the rental of storage tanks made in November 2008. Records available indicated that there had been a series of other transactions tied to the payment which suggested that WAPCO also owed BOST some amount of money. It was agreed between BOST and WAPCO in a meeting held on June 13, 2016, on the issue that the reconciled sum due WAPCO was US$255,423.92.

BOST demonstrated good faith and paid this amount to WAPCO on July 12, 2016, which was duly acknowledged by them. At the meeting referred to above, the issue of waiver of interest by WAPCO was broached. . However, due to a delay in payment, a subsequent demand was received from WAPCO demanding a balance in interest. After negotiations BOST proposed to pay interest at the rate of 8% which was initially agreed to by WAPCO, which later changed its mind as a result of which Ecobank cheque numbered 0200461 in the sum of GH¢480,338.99 dated March 9, 2018, which was made out to them for collection had to be returned to chest.

Subsequent to the filing of a writ to recover their interest claim on March 29, 2018, both parties agreed to the payment of interest at the rate of 10% instead of the 12% WAPCO had insisted on which was adopted by the Court as a consent judgment.

As at Q2 2020, BOST had settled all obligations with WAPCO. We reiterate our audit recommendation.

According to Management Maison Consulting & Solution and Refinitiv are non-resident companies and therefore not registered with GRA for VAT purposes. A request was made to Professional Auto for VAT invoice and is yet to be obtained. We reiterate our audit recommendation. Maison Consulting & Solution and Refinitv being non-residence companies, BOST (the recipient of the services) is mandated to pay the VAT amount for the imported services as per Section 2(1) of the VAT Act. ‘Section 2(1c) of the VAT Act (870) state that, except as otherwise provided in this Act, the tax shall be paid ‘in the case of an import of services, by the recipient of the service.

Management notes this Observation and notice has been taken of the recommendations and steps have been put in place to ratify this by 2022 Q4.

Repaired Tanks Not in Use

Management is aware that it is in the best interest of BOST to operationalise all our revenue earning assets as we are working round the clock to make that a reality. From a paltry 18% in 2017, we are currently at 91%.. This recommendation had already been identified. That is the reason why the contract retention amount has not been paid till date even though it became due in October 2021. This has delayed the handing over of the project to BOST. The contractor was engaged on December 10, 2021 and is yet to replace the internal floating roof of tank 102. We are currently going through the contract management processes to close the project.

Management included the revamping of the old depot loading gantry at the Buipe depot in the scope of works for the BOST depot upgrade project which is scheduled for implementation from 2022 to 2023. A contractor has been engaged by management to repair tanks 101 and 102 which are connected by product pipelines to tank 103 at the depot. It is therefore not advisable to recommission tank 103 whiles hot works are being undertaken in the adjoining tanks hence the decision of management to re-operationalise the three tanks together after the approved works which are scheduled for four months. We reiterated our audit recommendation.

At the appropriate time Management will implement the observation in line with availability of resources and demand. For now, Management sees these assets as spares for the existing operational marine assets

With Professional Auto Centre ltd, an amount of 185,211.57 payment for servicing of BOST vehicles was requested. Ratification process is ongoing and is expected to be resolved by 2022 Q4.

..The absence of proper procurement engagement process and signed contract documents evidenced the existence of ineffective financial control mechanisms by BOST Management for contract management of the company.

. Management is taking steps to correct the anomaly by Q4 2022.

Management has already identified this weakness and has decided to outsource the Quantity Survey process. Management has initiated the required procurement process to engage a suitably qualified Quantity Surveying entity to provide Bill of Quantities (Engineer estimates) for all civil works in 2022.

I'm Adwenpa-Hene |Blogger & Broadcaster Journalist. I am the CEO and manager of this noble website. I publish on Entertainment, Sports, Politics, Lifestyle, and Technology. You can also follow Us on : YouTube Channel - My Ghana Media TV, Facebook - MyghanaMedia TV , Twitter - @MyGhanamedia2 & Instagram - My Ghana Media TV. Email Address: [email protected] Contact Us: 0200818719
@@MyGhanamedia2
Previous Komenda Sugar Factory Will Be Commissioned By End Of 2022 – Akufo-Addo Assures
Next KNUST Student Becomes The Only African In Top 10 Chegg Global Students Award