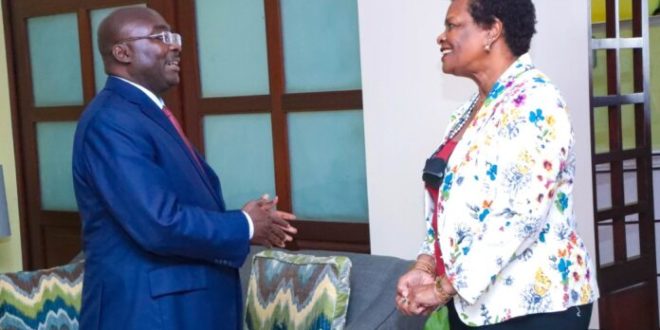 The Vice President of the Republic of Ghana, Dr. Mahamudu Bawumia has told a high-level Africa Caribbean summit in Barbados how the Akufo-Addo government has been implementing policies to address the issues of gender inequality in the country.

Addressing gender inequality from an African perspective was one of the topics discussed during an interactive session of the summit, and responding to a question on how African governments are dealing with it, Dr. Bawumia took his audience through a number of policies and interventions, which he said were aimed at bridging the gap between males and females in many aspects of life.

Below is his response to a question posed to him on dealing with gender parity from an African perspective:

“In Ghana close to about 52% of the population is female and so that is the majority population.

“Historically the issue has been exclusion, and if you are going to get the type of development that is required, you definitely need inclusion and therefore you need to create gender equality

“The vehicles we are using in Ghana for example, in creating gender equality is in the area of education. One of the things that we saw was the high levels of drop outs in females when you get to the secondary level. And usually when you get to the cost of secondary education, many parents are unwilling or unable to bear the cost of that education and usually the females tended to suffer in the choice matrix of which of your children should go to school.

“So when we came into office in 2017 we instituted a policy of free senior secondary education for all. We have done that since 2017 and it has just been remarkable. You’ve had hundreds of thousands of children who otherwise would not have had senior high school education now enrolled.

“What is now important in this context is that now you have more girl enrollees than boys. So whereas you had inequality or gender inequality in the school mix before, we now have virtual parity between boys and girls in secondary school enrollment and that is more important in trying to create more gender parity in the society.

“Recently one of our girls’ schools won a world robotic competition, beating countries like Germany, South Korea, the United States and we think that part of this is just the opportunity to learn because some of those girls, without the free senior high school opportunity, would not have had all of that.

“And you have the whole area of maternal mortality and how you will bring down cases, especially in the rural areas by making sure that mothers who are giving birth have access to critical blood supplies during birth. Ghana, following Rwanda, has introduced drones to deliver medical supplies, vaccines to remote areas and today Ghana has the world’s largest medical drone delivery.

“This tells us, Africa and the Caribbean can be in the lead when it comes to the technologies because we don’t have legacy systems and therefore we can leapfrog in many areas and this is one area I think we can all work on. I think that the more we use technology to build an inclusive society, the more gender parity we create and that is how we should proceed.”

Dr. Bawumia led a government delegation to the Conference, which discussed cooperation and development between Africa and the Caribbean.