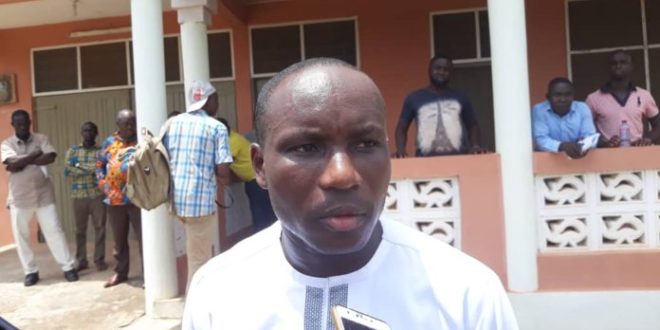 Information gathered by MyGhanaMedia.com  indicate the District Chief Executive of Ellembelle, Kwasi Bonzo has been arrested by the Western Regional Police Command.

Our sources say the DCE was allegedly assaulted and handcuffed by the police and are currently enroute the Agona Nkwanta stretch towards their custody.

The DCE and the Ellembelle police command have engaged in a melee the past few days over some missing two brand new excavators.

The DCE had accused the police for leaving their post for the excavators to get missing when they were left in their care.

He described the development as an organised crime following the circumstances surrounding how the excavators got missing.

The police had also accused the DCE and launched an investigation on him and his Aide.
Details of the arrest

His arrest happened metres away from the Axim junction after he had attempted to verify whether an excavator being transported was among the two that went missing after the Ellembele District Mining Committee seized them at an illegal mining site.

Connect 97.1fm Sekondi-Takoradi  has learned that the DCE was on his way to Sekondi for a radio program when he received a tip off that a brand new excavator has been spotted being escorted on the Ellembele road.

He and the team travelling, tracked the machine to a spot after the Ankobra Beach Resort but could not stop it.

They persisted. However the vehicle transporting the machine slowed down while going over some rumble strips few meters to the Axim junction.

It was there that the DCE is reported to have identified the excavator as among those missing. He and his team managed to stop the vehicle.

While he was inquiring from the driver where he was taking the excavator to, some plain clothed officers in a white pick up and Nissan Patrol car came out and a confrontation ensued.

In the course of the exchanges, ConnectNews learns the DCE was physically assaulted, handcuffed and handled into the waiting white pick up.

The arrested DCE is currently being brought to the Western Region Police Command.