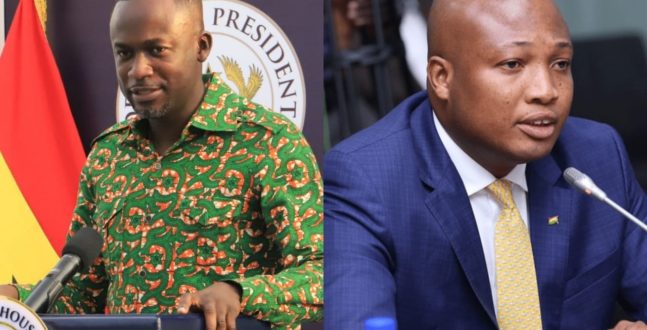 Eugene Arhin To Ablakwa: Minimise Your Propaganda Against Presidential Jet

The Director of Communications at the Presidency, Eugene Arhin, has advised North Tongu MP, Samuel Okudzeto Ablakwa, to be mindful of his ‘propaganda’ against the presidential jet’s usage.

Mr Arhin made this call while responding to the MP’s earlier assertions that, someone had traveled with the presidential jet to France.

In a Facebook post on Thursday, he explained that contrary to the claims by Mr Ablakwa, the presidential jet only traveled to France for repair works.

“Indeed, the Presidential Jet departed Ghana on 30th August to France for major repair works to be carried out on it – repair works which are very much long overdue”, Mr Arhin stated.

He continued, “The Air Force has indicated that the Presidential Jet will be out of service for a total of four (4) months, and will return to Ghana and be available for use in December.

“It will be recalled that in May this year, the Minister for Defence, Hon. Dominic Nitiwul, alerted Ghanaians to the fact that the Presidential Jet would be flown to France for major repair works to be undertaken on it”.

The clarification by Mr Arhin comes on the back of a recent Facebook post, where Mr Ablakwa alleged that the Presidential jet was flown non-stop to France on August 30, despite earlier claims that the jet could not embark on such travels.

Mr Ablakwa therefore questioned the truth about the use of jet, and the circumstances surrounding it.

But in his rebuttal, Mr Arhin told the MP “to minimize his penchant for engaging in propaganda regarding the Presidential Jet, to avoid further embarrassments to his person”.

This has been triggered by the series of corrupt allegations from Mr Ablakwa about the president’s travels.

While Mr Ablakwa has been consistently arguing that the jet is fit for the purpose and therefore the President should not charter any other ‘luxurious’ jet, the Presidency has been discounting these claims, hence the controversy.

See also  Presidency To North Tongu MP: Akufo-Addo’s Travels Have Benefits, What About Yours?
Thanks for reading from MyGhanaMedia.com as a news publishing website from Ghana.

I'm Adwenpa-Hene |Blogger & Broadcaster Journalist. I am the CEO and manager of this noble website. I publish on Entertainment, Sports, Politics, Lifestyle, and Technology. You can also follow Us on : YouTube Channel - My Ghana Media TV, Facebook - MyghanaMedia TV , Twitter - @MyGhanamedia2 & Instagram - My Ghana Media TV. Email Address: [email protected] Contact Us: 0200818719
@@MyGhanamedia2
Previous Mahama To IMF Boss: ‘It Is A Relief To Support The People Of Ghana In These Perilous Times’
Next Nalerigu TikTok Student Nurse Facing Stigma Despite Intervention By School Authorities