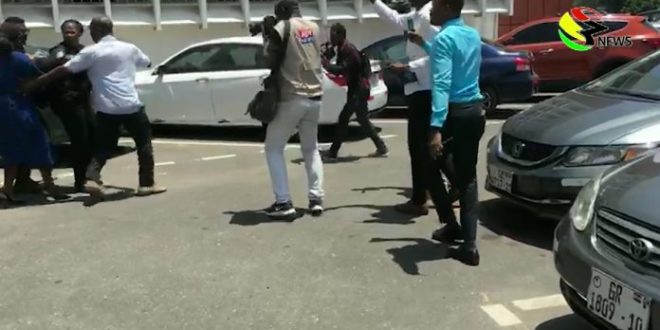 An accomplice of Aisha Huang, the Chinese ‘galamsey queen’ who was also accused together with the kingpin collapsed in court Wednesday whilst proceedings were ongoing.

It is unclear what might have triggered that but Joy News’ Joseph Ackah Blay, who is in court, reports that the female suspect was rushed out of the court forcing Miss Huang to break down in tears.

Ms. Huang is facing two charges of mining without license and engaging in the sale and purchase of minerals without a valid license.

See also  ‘Even If You Seize Our Machines, We Will Use Our Hands’ – ‘Galamsey’ Night Workers Mock President Akufo-Addo
https://myghanamedia.com/wp-content/uploads/2022/09/F2mp_download_sd-1.mp4

The Accra Circuit Court 9 has, nonetheless, denied her bail. Her three Chinese counterparts who were also arrested were denied bail.

This is the second time in less than two weeks Miss Huang and her counterparts have been denied bail.
This follows her re-arrest in the Ashanti Region.

One of the accused in the Aisha Huang case passes out in court.

She was subsequently arraigned and appeared in court on September 5, 2022.

She is expected to stand trial with three other accomplices – Johng Li Hua, Huang Jei and Huaid Hun.