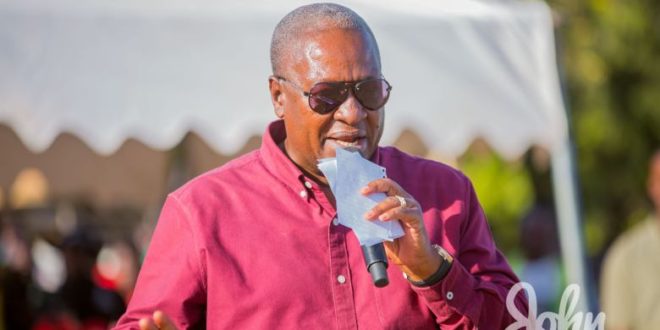 The New Patriotic Party (NPP) has accused former President John Dramani Mahama of preying on the emotions of Ghanaians and leveraging the resulting fear and worry for his politics.

According to the party, Mr. Mahama is raising dust about emoluments in order to exploit the difficulties related to the global cost of living crisis.

“As a champion of the IMF, he is now fighting the IMF for confirming that Ghana’s economic challenges are not due to bad policy choices but to the severe impact of Covid-19 and the war. This is the insincerity of former President Mahama continuing to make political promises he does not intend to keep.”

NPP National Communications Director, Richard Ahiagbah who addressed the media on Wednesday said the former President has brought his posturing to the Article 71 issues and creating the impression that given the political opportunity, he will amend it.

This, he said, is inconsistent with the opportunities he had gotten to amend it when he had power as the Vice-President and President between 2009 and 2017.

Ladies and gentlemen of the press, we have invited you to this press conference to expose the insincerity, inconsistency and lack of seriousness of former President John Dramani Mahama about governance issues (hereafter Mahama).

Unfortunately, for Ghanaians, former President Mahama has brought his posturing to the Article 71 issues, creating the impression that given the political opportunity, he will amend it. However, this posturing on the repeal of Article 71 is inconsistent with the opportunities he had gotten to amend it when he had power as the Vice-President and President of this Republic effectively between 2009—2017.

Members of the press, on this matter, former President Mahama is all talk and no action because he has had every opportunity to repeal Article 71 as President of this Republic, but he failed to do so.

Recall that the Constitution Review Commission set up by the Mills-Mahama administration submitted its report on 20th December 2011, and the government issued a white paper accepting, among other things, the portion of the review relative to the provisions of Article 71.

Permit me to quote from the white paper an item captured under issue eight: Determinization of the Conditions of Service of Some Public Officers by the President. “Government accepts the recommendation that an Independent Emoluments Commission should be established to determine the salaries, allowances and emoluments of all public officers, from the President to the lowest ranking public officer.”

Mahama became President in 2012, barely a year after the acceptance of the recommendations of the Constitution Review Commission. All President Mahama needed to do was to present a draft bill to parliament, per Article 290 (2), to trigger the amendment process. But as the talk master general, former president Mahama did not act on the white paper. Instead, he ignored the white paper to create and benefited from emolument committees—two of them.

Ladies and gentlemen of the media, I am sure you watched former president Mahama’s interview with Alfred Ocansey on TV3’s Ghana Tonight show, where he said that the government does not take care of his expenses as a former president and beneficiary of Article 71. He said he takes care of all his bills, including his rented office and staff salaries. But is it true that the former President is denied his entitlements as provided for by law?

There is something very cynical about the former President’s blatant falsehoods about his enjoyment of the privileges of Article 71 of the 1992 Constitution. Ladies and gentlemen, we have assembled the relevant documentation that suggests former President Mahama is enjoying and has not been denied any of his article 71 guaranteed benefits.

You recall that on 22nd October 2020, Mahama promised to grant galamseyers amnesty if he won the election for President. Now contrast this amnesty position with what former President Mahama said on the Ghana Tonight show about President Nana Addo Dankwa Akufo Addo needing to resign because he vouched to fight galamsey, whatever the cost.

In conclusion, ladies and gentlemen, I would like to ask a favour; please inquire from former President Mahama—how does granting amnesty to galamseyers contribute to the fight against galamsey? But do not hold your breath because this talk about amnesty is no different from the NDC’s promise to offer a one-time NHIS premium.

We believe that former President Mahama is pounding the pavements about article 71 because he is trying to exploit the difficulties related to the global cost of living crisis. When former President Mahama addresses international fora, he concedes that Africa’s economy has virtually collapsed by the twin factors of Covid-19 and the Russia-Ukraine war.

However, in Ghana, former President Mahama pretends that the Covid-19 and Russia-Ukraine war has nothing to do with the cost-of-living difficulties. As a champion of the IMF, he is now fighting the IMF for confirming that Ghana’s economic challenges are not due to bad policy choices but to the severe impact of Covid-19 and the war. This is the insincerity of former President Mahama continuing to make political promises he does not intend to keep.

So, you understand that all former President Mahama is doing is what he has always done: to prey on the emotions of Ghanaians and leverage the resulting fear and worry for his politics. Mahama is not about the work; he is only about the talk.

I'm Adwenpa-Hene |Blogger & Broadcaster Journalist. I am the CEO and manager of this noble website. I publish on Entertainment, Sports, Politics, Lifestyle, and Technology. You can also follow Us on : YouTube Channel - My Ghana Media TV, Facebook - MyghanaMedia TV , Twitter - @MyGhanamedia2 & Instagram - My Ghana Media TV. Email Address: [email protected] Contact Us: 0200818719
@@MyGhanamedia2
Previous Aisha Huang Was Staying In A Former Minister’s House At East Legon
Next Abronye Writes: John Mahama Has Transmogrified From An Incompetent Former President To A Horrendous Liar; He Has No Mercy For The Public Purse