On 14th September, 2022,  Aisha Huang, a Chinese galamseyer with some other accused Chinese nationals appeared before an Accra Court. The accused are facing charges of engaging in the sale of minerals without license. The judge refused a bail attempt by the counsel for the defendant and remanded the accused persons in custody for 2 weeks.

The issue of Aisha Huang has raised many eyebrows in the past few days as there have been contradicting stories regarding how she left the country some few years ago. Many feel the government hasn’t been sincere with the people of Ghana. On Good Morning Ghana today, Wednesday, September 14, 2022 , the Member of Parliament  for Afigya Kwabre North, Collins Adomako-Mensah mentioned that the issue of galamsey and Chinese dominance in the country goes beyond Aisha Huang.

He narrated a situation that happened to him while he was in Kumasi and explained that the Chinese are virtually taking possession of everything in the country. He mentioned how he and some friends who had gone out for a drink were told to leave their seats because it was reserved for some people.

“Three weeks ago I was in Kumasi and myself and a few friends decided to go to a pub to have a drink. Ten minutes after we sat one of the gentlemen approached and told us we had to get up and move to a new place. They know I am an MP. After a little argument we moved and ten minutes later some Chinese guys entered to take the seats and they were treated with all the courtesies” Collins Adomako explained.

According to the MP the issue is now more of prestige and the image of Ghanaians as the local people like himself are being chased out of their own lands. He called for the government to act so that galamsey will be camped. Collins noted that he is appalled that despite he being an MP the pub owners refused to accord him and his friends some respect and rather moved them to different seats so as to preserve seats for some Chinese men who presumed to be engaging in galamsey.

Aisha Huang is expected to reappear in court on September 27. All eyes will be watching to see what will happen. Many Ghanaians are however not optimistic that the galamsey queen will be punished because of past experiences. 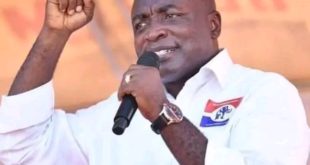 NPP Flagbearership Race: It Must Be Battle Of Ideas Not Insults – Kwabena Agyapong

Spread the love The overlord of the Gonjaland Traditional Area in the Savannah region, Yagbonwura …