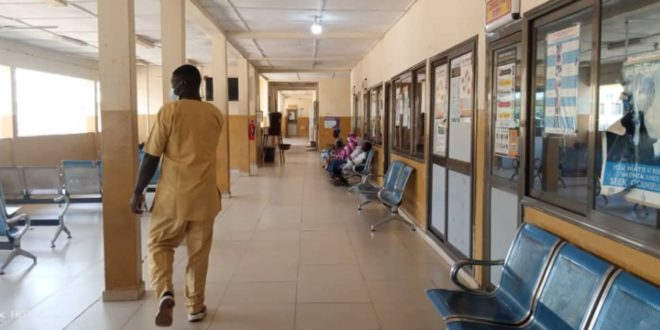 Medical Officers Who Have Intentions Of Accepting Posting Or Transfer To Here Must Be Careful – Aggrieved Doctors At St. Anne’s Hospital Cautions

Aggrieved Medical Doctors at the Saint Anne’s Hospital (formerly known as West Gonja Hospital) in Damongo in the Savannah Region have served strong notice to doctors who have intentions of accepting posting or transfer to the facility.

According to them, the general working conditions especially payment of allowances among others are in bad taste.

“We only want to tell them before they take the risk in accepting posting here like we did few years ago because we are in a fix. And so, we have agreed that this time around, we are tired because for almost a year, we have not been paid our allowances.

“Not only that, our top ups are also in arrears from January this year up to date. Our fuel allowances are equally in arrears. Everything now seems to be in arrears”.

They continued, “we have written letters and proposals and all that and nothing meaningful has come out of it. And we want to say that, medical officers who want to come here, will have to be careful else, they will have themselves to blame”.

JoyNews sources at the Hospital shared a year long experience on failed negotiations and promises between the doctors and the Chief Executive Officer of the Hospital, Mr. Peter Paul Aakyier.

They lamented that since July last year, they have not been paid their stewardship allowances despite series of engagements with the the Hospital.

They also indicated that not even the intervention by the Savannah Regional Minister, Saeed Muhazu Jibril for rectification has yielded any results.

“So, as you can see, it’s obvious that they are treating us like kids. Give us our money too, you don’t want to give it to us. But we need money to take care of things,” a source stated.

The doctors who are set to embark on a strike action, said they have shown enough goodwill but that has not been reciprocated by management, “and today when we want to go on strike, it will be like we are insensitive”.

They further indicated that, the Hospital has what it takes to settle their arrears because, “the facility recently auctioned cars and when you tell them, they say, they are going to do investments with the money. So, we also served copies of our letters and proposals to Ghana Health Service and the Regional Minister on our plights.

“First of all, we did the proposal and said, pay us 10 months installment and in the first proposal, the CEO agreed to pay the arrears and up to now, not even a single month has been paid”.

See also  Video: One In Critical Condition In An Accident At Akyem Aboabo

While responding to the question on the non-payment of arrears, the doctors responded adding, “they said it’s not visible meanwhile, health Insurance has been paying. And even currently, the health insurance has paid one month again including the cars they auctioned and we decided to go on strike”.

“But now, we want the Regional Minister and the MP to know that we are waiting for this month to end if they (Hospital management) don’t pay us, we will advise ourselves because if we are hungry, nobody will give us food”, the source added.

On other sources of income for their survival, the doctors said that , “when you are in Damongo you don’t have anything because it’s located in an area that makes it very difficult for one to have private engagement with other health facilities.

“As it stands now, the person who does the scans for the Hospital is gone. Meaning, the whole of Damongo we don’t have a Sonographer. He has left and there are rumors that one that just finished with his National Service from Holy Family Hospital has shown up and is likely to face similarly treatment like his successor”, they stated.

Meanwhile, management of the Hospital is mute on the matter. Also, JoyNews will continue to monitor the situation on the ground.