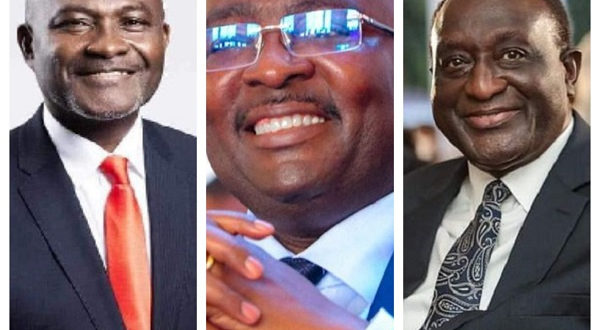 What Dr. Bawumia, Alan And Kennedy Agyapong Have Said About 2024 NPP Flagbearership Bids

The New Patriotic Party [NPP] will elect a new flagbearer ahead of 2024 elections in which the party is hoping to retain power, i.e. break the eight – reference to winning a third consecutive term in office.

The race to succeed President Nana Addo Dankwa Akufo-Addo as leader of the party and as President, after the elections, is one of the most keenly awaited political events in the country. It is slated for some time next year.

There has been two broad category of contestants in the flagbearership race – those that have openly announced their bids and those that are widely rumoured to be interested.

The first group comprise people who are largely not in the executive whiles the rumoured candidates are appointees of the President.

Vice President Dr. Mahamudu Bawumia is a frontliner in the group of rumoured aspirants. He addressed for the first time the question of his interest in the race or otherwise.

In an interview with Kenyan private TV channel, KTN News, Bawumia said he was committed to supporting the president to deliver on his plans and policies for now.

He stated that 2024, which is an election year, is not on the top most agenda of the government adding that the Akufo-Addo led administration is focused on bringing relief to Ghanaians.

“I think right now, I’m just focused on helping my boss the president Nana Akufo-Addo fulfil his vision and deliver on his agenda. We don’t really have too much time for thinking about 2024 right now. I think that if you get to 2024 and you don’t have a record, you will have nothing to campaign on. So right now, we are focused on that and we don’t know what the future holds but we will focus on the work for now,” Bawumia said.

Trade and Industry Minister, Alan John Kwadwo Kyerematen, for the first time commented on whether or not he will be contesting for the 2024 flagbeareship slot of the party, stating
that issue was less critical at a time the government is working assiduously to reverse the economic hardships facing the citizenry.

He told Paul Adom-Otchere on the July 7 edition of the Good Evening Ghana programme that, as an ‘old horse in the game,’ he is focused on supporting the economic recovery programme that has landed the government at the doorsteps of the International Monetary Fund, IMF.

“I am an old horse in this game, and I feel that where we are as a country, particularly at this very critical juncture, that conversation becomes less critical and important than us trying to work together … to see what kind of package we can get from the IMF and how we can get ourselves out.

Kennedy Ohene Agyapong, MP, Assin Central, in May this year became the first to publicly announce his bid to lead the NPP

Other contenders – rumoured and announced

There are other contenders in the race to lead the NPP. Two on record to have declared their intentions are former NPP General Secretary, Kwabena Agyapong and former Energy Minister, Boakye Agyarko.

The Agric Minister is also rumoured to be lacing his boots to contest as is Joe Ghartey, one-time Attorney General and Railways Minister.

I'm Adwenpa-Hene |Blogger & Broadcaster Journalist. I am the CEO and manager of this noble website. I publish on Entertainment, Sports, Politics, Lifestyle, and Technology. You can also follow Us on : YouTube Channel - My Ghana Media TV, Facebook - MyghanaMedia TV , Twitter - @MyGhanamedia2 & Instagram - My Ghana Media TV. Email Address: [email protected] Contact Us: 0200818719
@@MyGhanamedia2
Previous I Still Want To Marry A Woman From The Volta Region – President Akufo-Addo Declares
Next Sefwi Elubo Chief And Brother Arrested For Illegal Mining In Some Compound Houses