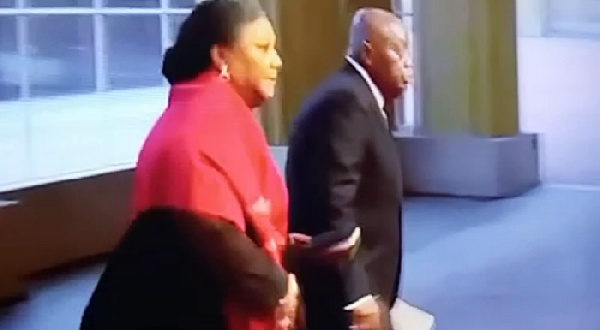 The President of Ghana Nana Addo Dankwa Akufo-Addo is in London for the funeral of Queen Elizabeth II.

The president, accompanied by First Lady Rebecca Akufo-Addo, is believed to have left Accra on Sunday to join other world leaders for the event.

Even though no official communication of his departure from Accra has been made, GhanaWeb sighted a Reuters video in which Akufo-Addo and the First Lady arrive for the a state reception in honour of the late monarch.

It was widely expected that he will travel having been listed as one of the invited leaders of the Commonwealth.

Last week, after signing the book of condolence at the British High Commission in Accra, Akufo-Addo announced that he had intentions of travelling to London for the funeral.

“I intend to go to London for the funeral, I don’t know whether you have anything particular to tell me about that?” he asked High Commissioner Harriet Thompson.

To which she responded: “The invitations have been sent, s they will be with your High Commission in London. They were sent over the weekend and we’ll make sure the arrangement works smoothly between your team there and our team here.”

“Let me take the opportunity to also wish the King the best of luck with his tenure. He has been here with us a few occasions, he is a good friend and I am confident that he will do a very good job in her succession,” he stressed.

The world’s longest serving leader, Her Majesty Queen Elizabeth II, was pronounced dead on Thursday, September 8, 2022, via a statement from the royal family.

She became queen at the age of 25 and remained on the throne for seven decades before her death.

Elizabeth II was Queen of the United Kingdom and Head of State for 14 other jurisdictions.

Queen Elizabeth’s eldest son Charles, 73, has been named succesor and by that becomes king of the United Kingdom and the head of state of 14 other realms including Australia, Canada and New Zealand. His wife Camilla becomes Queen Consort.

I'm Adwenpa-Hene |Blogger & Broadcaster Journalist. I am the CEO and manager of this noble website. I publish on Entertainment, Sports, Politics, Lifestyle, and Technology. You can also follow Us on : YouTube Channel - My Ghana Media TV, Facebook - MyghanaMedia TV , Twitter - @MyGhanamedia2 & Instagram - My Ghana Media TV. Email Address: [email protected] Contact Us: 0200818719
@@MyGhanamedia2
Previous Ghana: Today’s Newspapers Headlines; Monday September 19, 2022
Next There Will Be No Increment In Transport Fares Today – GPRTU