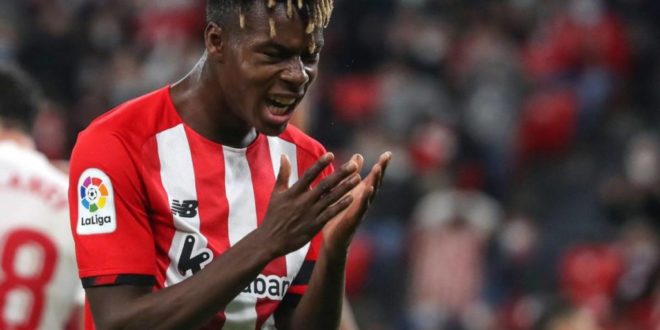 The Athletic Club youngster has been named to Spain’s squad for their Nations League games against Switzerland and Portugal.

Many believe the decision is to prevent the talented winger from representing Ghana after Spain lost his senior brother to the West African country earlier this year.

Inaki, who has one Spain cap, joined Ghana in June and will make his debut later this month.

Nico, who has played for Spain’s U18 and U21 teams, stated in June that he needed time to decide on his international future after being approached by the Ghana Football Association, but the young attacker has accepted Spain’s invitation.

“I’m not doing this to stop from him going with Ghana; he’s young and a very interesting player,” Enrique said as quoted by The Guardian.

“He’s playing more often with Athletic now. He’s progressing wonderfully. I like him enormously. We’ve had him in the junior squad and have been following him for a long time. I reckon the family will be delighted: imagine the party if they both go to the World Cup. And they reach the final, well, that would be the absolute business.”

Inaki and Nico both scored for the first time in a game over the weekend, as Athletic Bilbao beat Rayo Vallecano in the La Liga.

Inaki is in Ghana’s camp, preparing for friendlies against Brazil and Nicaragua.