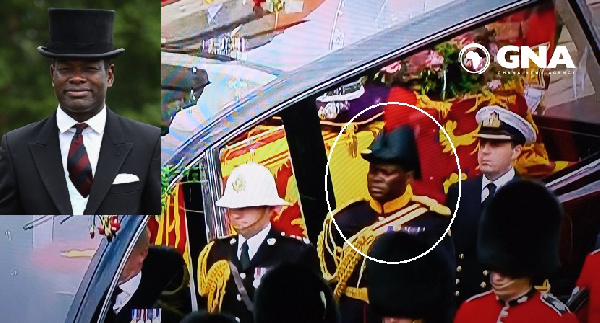 Among the military men who escorted the cortege of Queen Elizabeth II on its last journey from Westminster Abbey to the St. George’s Chapel was a Ghanaian-born British soldier, Lieuetenant Colonel Nana Kofi Twumasi-Ankrah.

He was the only Black person in the group of over a dozen officers who marched along with the cortege on September 19, 2022 after the official funeral had been held.

A former United Kingdom High Commissioner to Ghana, Jon Benjamin, was full of praise for Twumasi-Ankrah, who has been a Personal Assistant of the late monarch – as her equerry.

The Queen’s current equerry, who just welcomed Boris Johnson to Buckingham Palace and took him into the Queen’s presence, is Major Nana Kofi Twumasi-Ankrah from the Household Cavalry – of Ghanaian family heritage of course. pic.twitter.com/ZQDW97SPLq

In 2017, then Major Twumasi-Ankrah was named by Queen Elizabeth II as her equerry, becoming the first black man to hold this position.

An equerry’s duty primarily is that, at official activities, including public visits and receptions at Buckingham Palace, he assists the monarch.

His military history has it that he is an officer of the Household Cavalry and a veteran of the war in Afghanistan.

Twumasi-Ankrah enrolled at Queen Mary University, London upon completion of his school education and then joined the Royal Military Academy Sandhurst.

He who was commissioned by the Blues and Royals at the time, served in the military all his life. He was the first British Army black African officer to be commissioned into the Cavalry of the Household.

Speaking on film for a documentary on Britain’s open and democratic society, Major Twumasi-Ankrah said: “As a young child, watching her majesty the Queen’s birthday parade on television, I would have never imagined that one day I’d command the regiment which I’d fallen in love with.”

He added: “From where I sit and from what I’ve seen in the UK, our cultures really do mix and intermingle, and if I’m not a good example of that I really don’t know what is.”