Breaking News
Home / GENERAL NEWS / Akufo-Addo : High Inflation Is Not Only In Ghana; It’s The Same In The UK And US 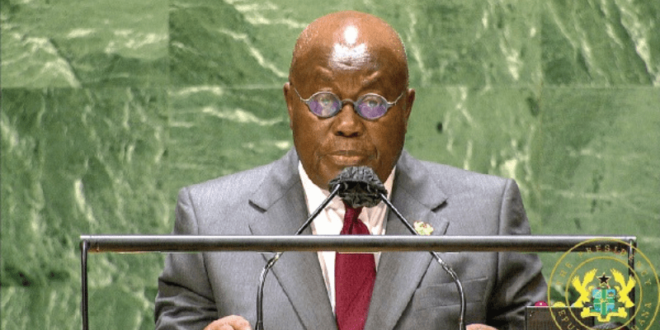 Akufo-Addo : High Inflation Is Not Only In Ghana; It’s The Same In The UK And US

Inflation rate is not increasing in only Ghana but it is also the same story in some developed countries including the United Kingdom (UK) and the United States (US), President Nana Addo Dankwa Akufo-Addo, has said.

Mr Akufo-Addo said this at the 77th session of the United Nation’s General Assembly on Wednesday September 21.

Mr Akufo-Addo recounted the negative impact of the coronavirus pandemic as well as the ongoing Russia Ukraine war, on African economies.

He said “The economic turmoil is global with inflation as the number one enemy this year. It hit a 40-year-high in the US and UK in recent months. There is record inflation in the euro zone. Several African countries have inflation rates surging three to four times higher than what they were just two years ago.

“In Ghana, we are experiencing the highest inflation for 21 years. The high costs of food are hurting the poor, especially the urban poor, the most.

“Moreover, the spillover from central banks raising interest rates to combat inflation has been severe beyond borders, as global investors pull money out of developing economies to invest in bonds in the developed world.

“This has led to depreciating currencies and increased borrowing costs; meaning we need to raise and spend more of our own currencies to service our foreign debts in US dollars.

“It has become clear, if ever there was any doubt, that the international financial structure is skewed significantly against developing and emerging economies like Ghana. The avenues that are opened to powerful nations to enable them take measures that would ease pressures on their economies are closed to small nations.

See also  VIDEO: 'It Is Not Possible To Have A Bad Day' - Legend Anthony Baffoe Inspires Ghana Players Ahead Of Gabon Clash

“To make matters worse, credit rating agencies have been quick to downgrade economies in Africa, making it harder to service our debts. The tag of Africa as an investment risk is little more than, in substance, a self-fulfilling prophecy created by the prejudice of the international money market, which denies us access to cheaper borrowing, pushing us deeper into debts.

“The financial markets have been set up and operate on rules designed for the benefit of rich and powerful nations, and, during times of crisis, the façade of international co-operation, under which they purport to operate, disappears.

“These are the savage lessons that we have had to take in, as the world emerged from the grip of the coronavirus to energy and food price hikes, and a worldwide rise in the cost of living. The necessity for reform of the system is compelling.”

I'm Adwenpa-Hene |Blogger & Broadcaster Journalist. I am the CEO and manager of this noble website. I publish on Entertainment, Sports, Politics, Lifestyle, and Technology. You can also follow Us on : YouTube Channel - My Ghana Media TV, Facebook - MyghanaMedia TV , Twitter - @MyGhanamedia2 & Instagram - My Ghana Media TV. Email Address: [email protected] Contact Us: 0200818719
@@MyGhanamedia2
Previous Your Promise To Fix Our Road Is Yet To Be Fulfilled – Cape 3 Points Chiefs Remind Akufo-Addo
Next Nigeria Clears 18 Candidates For Presidency