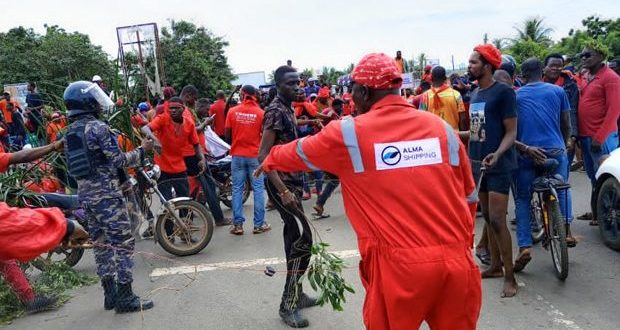 The peaceful demonstration against a Salt Mining Campany in the Ketu South Municipality of the Volta Region last Tuesday, September 27, 2022, was almost marred after a protester shot another protester in the thigh.

Sources at the scene said that the shooting incident happened just as the protest match was about to start. 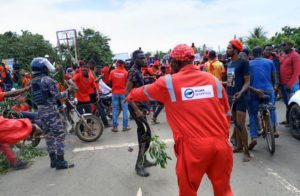 The suspect fired the gun amidst the crowd that had gathered in their numbers for the protest.

A police source who also confirmed the shooting incident said from the injury of the victim, it appears the assailant may have been aiming at the ground.

Preliminary investigation also suggests that the assailant may have used a locally manufactured pistol. 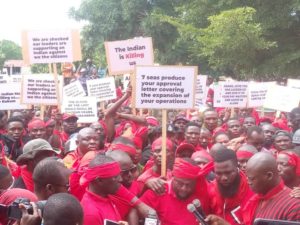 Due to the size of the crowd, their composure, and their location at the time of the shooting, the shooter managed to escape before the police could apprehend him.

Meanwhile, the victim, identified as Abla Adzabli was rushed to the Ketu South Municipal Hospital where she is receiving treatment.

The Denu Police are on a manhunt for the shooter.

The protest which attracted over 600 people clad in red and wielding placards was unhappy with deaths and injuries occurring in the lagoon around Adina and adjoining communities.

The latest death involved a pregnant woman and her three children. They had gone fishing together with the husband and father of the children, one Atitso Amewu.

The incident which occurred about two weeks ago saw the four drowning in a trench disguised by the lagoon.

Residents have blamed the Seven Seas Salt Mining Company for digging the trenches in the lagoon to construct dykes.

However, the company has denied responsibility but promised to improve safety measures within and around its concession to protect lives and property.

The Ketu South Municipal Chief Executive, Maxwell Lugudor has also assured that the Assembly will address all issues raised by the residents appropriately.