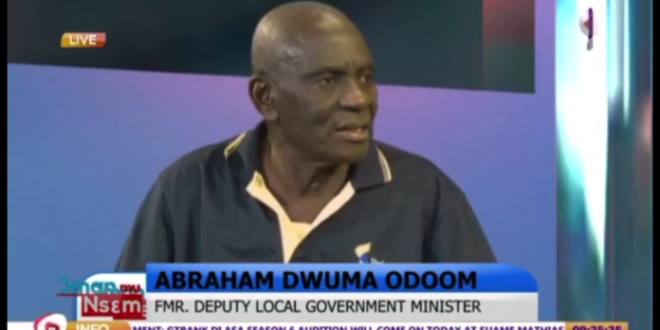 A former Deputy Local Government Minister under the erstwhile Kufour administration, Abraham Dwuma Odoom, has recounted his encounter with some Chinese nationals who tried to bribe him into Galamsey.

This revelation by the former minister comes at a time when the government’s fight against galamsey has been heightened.

In September 2022, over 164 illegal miners were arrested following a three-day operation by the military at Anyinam and Mampong in the Ashanti Region.

The suspects who were mostly foreign nationals were from Nigeria, Côte d’Ivoire, Mali, Niger and Burkina Faso.

Five female sex workers who allegedly provided sexual services to the illegal miners were also arrested in the swoop.

Popular Chinese “Galamsey queen”, Aishà Huang, who is in custody was also denied bail for the second time an Accra Circuit Court.

Aisha Huang was arrested in 2017 and deported to China for her involvement in illegal mining activities.

The Galamsey queen has however been arrested and remanded by Accra Circuit Court for her involvement in illegal small-scale mining activities.

Sharing his encounter with illegal miners in an exclusive interview with host of Atinka TV’s “Oman Mu Nsem” show on Saturday, Abraham Dwuma Odoom said the incident happened during his time as DCE for Twifo Praso.

“Let me tell you a true story: when I was DCE for Twifo Praso, some Chinese illegal miners came to me with money, begging me to let them mine gold in the River Pra.” I told them flatly that they would not be allowed. “As DCE, I refused the bribe,” Abraham Dwuma Odoom recounted.

Listen to Abraham Dwuma in the audio below:

I'm Adwenpa-Hene |Blogger & Broadcaster Journalist. I am the CEO and manager of this noble website. I publish on Entertainment, Sports, Politics, Lifestyle, and Technology. You can also follow Us on : YouTube Channel - My Ghana Media TV, Facebook - MyghanaMedia TV , Twitter - @MyGhanamedia2 & Instagram - My Ghana Media TV. Email Address: [email protected] Contact Us: 0200818719
@@MyGhanamedia2
Previous NDC Fights NPP Over E-Blocks
Next Razak Kojo Opoku Writes : NDC Has Been To IMF 10 Times & NPP Has Been To IMF Only Twice