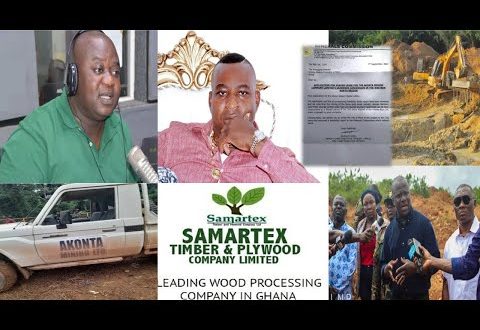 The Ashanti Regional Chairman of the New Patriotic Party (NPP), Bernard Antwi Boasiako, has clashed with the Public Relations Officer of the timber processing firm, Samertex, Vincent Torgah, over rights to be operating in the Tano Nimiri Forest Reserve.

The clash comes after the Minister for Lands and Natural Resources, Samuel Abu Jinapor, directed the Forestry Commission to cease the operations of Akonta Mining Company in the Tano Nimiri Forest Reserve of the Amenfi West Municipal Assembly.

According to a statement issued by the Public Affairs office of the Ministry on Friday, September 30, 2022, the company owned by the ruling NPP Chairman for Ashanti Region, Bernard Antwi Boasiako, alias Wontumi, has been engaging in mining activities in the forest without a permit.

“The attention of the Ministry of Lands and Natural Resources has been drawn to publications about certain operations by Akonta Mining Limited in the Tano Nimiri Forest Reserve in the Amenfi West Municipality in the Western Region.

Reaction to this in an Asempa interview monitored by GhanaWeb, on Tuesday (October 4), Wontumi insisted that he has the right to some parts of the Nimiri Forest and he is only awaiting a mining lease from the ministry to start the mining.

“If Samertex says they have the right to the disputed parts of the forest, they should provide their evidence like I have.

“Akonta Mining is not mining in the forest; we only entered the forest about two years ago but Samertex knows that there have been illegal miners in the forest since 2013. Why did not report these galamseyers to the forestry commission?” he said in Twi.

He added that his company together with some security only went into the forest to sack illegal miners who were already in the forest but they were attacked by officers of Samertex which led to the destruction of one of his vehicles.

But, the PRO of Samertex, Vincent Torgah, who joined in the conversation, said that the claims of the NPP regional chairman were false.

According to him, the Forestry Commission of Ghana which gives leases to forests in the country has on some occasions informed Wontumi’s Akonta Mining that it has no right to be mining in the forest.

“The Ministry has told Akonta Mining on a number of occasions that it has no right to be mining in the forest.

“But anytime we go to the forest with officials of the Forestry Commission, we see that the mining is ongoing. The security of Akonta sometimes refuse to let us leave the forest and we have to be rescued,” he said.

Listen to the clash in below:

I'm Adwenpa-Hene |Blogger & Broadcaster Journalist. I am the CEO and manager of this noble website. I publish on Entertainment, Sports, Politics, Lifestyle, and Technology. You can also follow Us on : YouTube Channel - My Ghana Media TV, Facebook - MyghanaMedia TV , Twitter - @MyGhanamedia2 & Instagram - My Ghana Media TV. Email Address: [email protected] Contact Us: 0200818719
@@MyGhanamedia2
Previous Save Your Face By Going After The “Big Fishes” In Galamsey – Kwesi Yankah Tells Akufo-Addo
Next UTAG, 3 University labour Unions Declares Indefinite Strike From Thursday, October 13