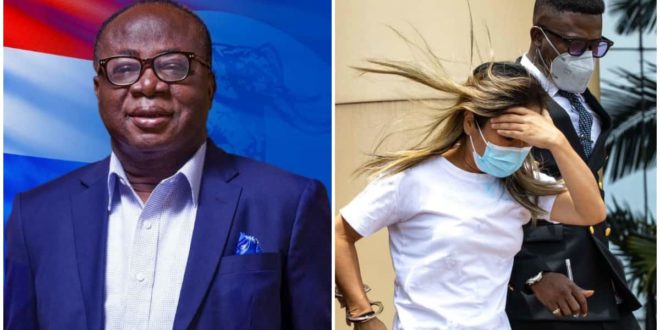 A feeling of surprise erupted in the Criminal Court 5 when it was announced that former NPP National Chairman, Freddie Blay, will be representing four accomplices of ‘galamsey’ queen Aisha Huang who are being held by the state for their involvement in illegal mining.

Lucy Ekeleba Blay, a private legal practitioner, announced in court that she was holding brief for Freddy Blay in the case of the four accomplices of Aisha Huang namely; Gao Jin Cheng, Lu Qi Jun, Haibin Go and Zhang Zhipeng.

Aisha Huang herself is being represented by NPP stalwart, Nkrabea Effah Dartey.

An application for bail made on behalf of the four accused persons was rejected by Her Ladyship Lydia Osei Marfo who said the accused persons are foreign nationals who do not have sufficient financial or social ties within the jurisdiction of the court and may not appear to stand trial if granted bail.

The judge said, “as we know in the country, people usually do not need any passport to exit if they are minded to leave and considering the severity of the punishment the accused persons will suffer if found guilty, I have sufficient belief that when granted bail, they will not appear before this court to stand trial.”

The plea of three of the accused persons has been taken with that of the last deferred due to the unavailability of a Vietnamese translator.

Both Aisha Huang and her accomplices have been remanded into custody until November 24, 2022.

The Attorney-General, Godfred Yeboah Dame indicated to the court the readiness of the state to expeditiously dispose of the case and will be willing to try the case on a day-after-day basis.

He added that the judge superintending over the case has “also indicated his inclination to conduct the case in that manner.”

“In respect of Aisha Huang, we have filed most of the documents to be relied on, we have filed witness statement of four witnesses. We only need to file about four more,” he said.

I'm Adwenpa-Hene |Blogger & Broadcaster Journalist. I am the CEO and manager of this noble website. I publish on Entertainment, Sports, Politics, Lifestyle, and Technology. You can also follow Us on : YouTube Channel - My Ghana Media TV, Facebook - MyghanaMedia TV , Twitter - @MyGhanamedia2 & Instagram - My Ghana Media TV. Email Address: [email protected] Contact Us: 0200818719
@@MyGhanamedia2
Previous Ghana: Today’s Newspaper Headlines; Tuesday, October 11, 2022
Next Prince David Osei To Akufo-Addo: We Will Protest Against You If Things Don’t Change By December