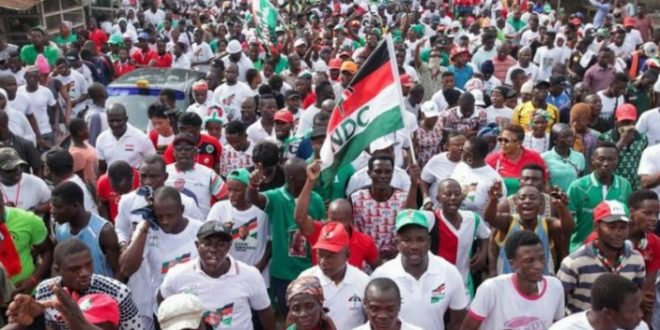 In a statement, the opposition party said the Ashanti Region, which is the government stronghold, was “grossly unappreciated.”

“Mr. President, to say, that the Ashanti Region, your grossly unappreciated political stronghold, has suffered and continues to suffer from your political misrule and economic mismanagement, is a huge understatement.”

“If there was a word to describe the performance and record of your six-year-old government relative to Ashanti Region beyond disappointment, we doubt same will suffice.”

The party singled out grievances by traders, illegal mining and bad roads as critical issues the President needed to address.

Commenting on illegal mining, for example, the party urged the President to crack the whip on persons affiliated with the government.

It said the fight against illegal mining “remains a mirage so long as you fail to exercise the political will to arrest and prosecute the grand mastermind of galamsey, Bernard Antwi Bosiako, aka Wuntumi, the Regional Chairman of your party.”

Find below the full statement

The National Democratic Congress (NDC) Ashanti Region, by this release, welcomes President Akufo-Addo as he begins his 4-day working visit to the Region.

At a time of unspeakable economic turmoil in Ghana as evidenced by a debt crisis and its attendant galloping inflation, interest rates hikes, continuous depreciation of the Cedi, ever-increasing fuel prices and spiraling cost of living, it goes without saying that residents of the Ashanti Region, and indeed, the generality of Ghanaians, are reeling under unprecedented economic hardship. To expect much from this tour of the Ashanti Region by President Akufo-Addo is therefore to hold on to forlorn hope.

Mr. President, to say, that the Ashanti Region, your grossly unappreciated political stronghold, has suffered and continues to suffer from your political misrule and economic mismanagement, is a huge understatement. If there was a word to describe the performance and record of your six-year-old government relative to Ashanti Region beyond disappointment, we doubt same will suffice.

Without doubt, the only known fruits of your promises to the people of Ashanti are the collapse of many businesses, rising poverty, despondency among others. As you begin your tour of the Region today, it is our hope that you will, for once, desist from your usual vacuous promises and highfalutin rhetoric which stand as your greatest and most visible legacy as President. As the clock ticks on your most unpopular regime, it is our prayer that you will honestly and sincerely address some key and pertinent issues that threaten the socio-economic survival of the very people on whose toil you rode to political prominence.

See also  Health Minister: I’ve Been Lambasted To The Extent That I Don’t Have Any Image In This Country

1. CLOSURE OF SHOPS BY TRADERS AT ADUM

Mr. President, the recent closure of shops by traders in the Central Business District of Adum is a cause for concern. It is a known truth that the local economy of the Region thrives on commerce. As the business community struggles to deal with difficulties from multiple fronts – high import duties, already-burdening tax regime and other unfriendly policies of your government, you have unleashed a ‘Tax Police’ on them. Having introduced VAT flat rate of 3%, having increased VAT by 5% (making NHIL levy and GETFUND levy straight taxes), having extended the duration of the 5% National Fiscal Stabilization Levy and the 2% Special Import Levies beyond 2017, all in your first term, you succeeded in moving Ghana from taxation to more taxation.

In 2021, your government further increased the tax burden on Ghanaians with the introduction of a 1% Covid-19 levy on VAT flat rate, thereby increasing it to 4%. You followed through with a 1% covid-19 levy on VAT NHIL, thereby raising same to 2.5% and a 5% Financial Sector Clean-up Recovery Levy. After introducing these raft of taxes, contrary to your promise to progress Ghana from taxation to production, there can be no justification to unleash tax Police after the already-suffering traders, thereby causing them to close down shops in your political stronghold for almost a week. This is the height of insensitivity and ingratitude to the good of Kumasi.

This singular act by the Adum traders is a vote of no confidence in your harsh economic policies and exposes the crass incompetence and cluelessness of the so-called economic management team headed by your discredited economic wizkid Alhaji Dr. Mahamudu Bawumia.

As you begin your tour of the region today, we expect you to man up and show contrition, by first apologising to the Adum traders and then withdrawing your tax Police forthwith. This is the least you can do to resolve the current impasse to save the good people of the Ashanti Region from bearing further brunt of your economic mess.

2. RISING SPATE OF ILLEGAL MINING POPULARLY KNOWN AS ‘GALAMSEY’ IN THE REGION

Mr.President, your tour of the Region comes at a time nearly all the water bodies, vegetative cover and forest reserves in the Ashanti Region are under siege and being destroyed by the activities of illegal Miners.

Sadly, this wicked destruction of the environment and vegetative cover of the Ashanti Region is being spearheaded by known appointees, in your government, as well as key functionaries of the New Patriotic Party. Today, ‘galamsey’ has become a free-for-all activity for MMDCE’s and Regional Executives of your party led by your Regional Chairman, Bernard Antwi Bosiako. aka ‘Wuntumi’. You have seen and heard reports, and in some cases, incontrovertible evidence of this official complicity in the illegal mining menace, yet you have turned a blind eye on same and refused to act, much to the disappointment of many stakeholders in the Region, including our highly revered King, Otumfour Osei Tutu II. Your Government’s community mining programme has become a euphemism for Galamsey with your MMDCE’S acting as gleeful gang leaders.

Reports have it that illegal mining activities traced to the Regional Chairman of your party, have completely destroyed the Kobro Forest Reserve and the Odaho River in the Manso enclave. Worst of it is that, he does this in broad day light with impunity and under the protection of state security. Only recently, his ‘galamsey’ activities caught national attention when his company, Akonta Mining Limited invaded the Tano Nimiri Forest Reserve in the Western Region without any lease or permit.

We have taken notice of the suspension, and not complete dismissal, of Mr.Yaw Danso, District Chief Executive for Bosome Freho, who happens to be one of the key ‘galamsey’ kingpins in the Ashanti Region, whose nefarious illegal mining activities date back to the early days of your administration. We are of the strong conviction that the suspension of Mr.Yaw Danso is meaningless if he is not eventually dismissed and made to face the full rigours of the law. More so, your so-called renewed fight against illegal mining remains a mirage so long as you fail to exercise the political will to arrest and prosecute the grand mastermind of galamsey, Bernard Antwi Bosiako, aka Wuntumi, the Regional Chairman of your party.

3. DEPLORABLE NATURE OF THE ROADS IN THE ASHANTI REGION

Mr. President, your record in the roads sector in the Ashanti Region is the worst in the Fourth Republic.Your tenure as President will go down as the period when the Ashanti Region was deprived of the much-needed road network that would have unearthed its huge economic potential and accelerated the Region’s development. Your so-called “Year of Roads” declaration of 2019 and 2020 means nothing more than mere platitudes and wishful thinking as far your stronghold of Ashanti is concerned. You have completely taken the Ashanti Region for granted after all the goodwill and support you have enjoyed.

The road network in the Kwabre East Constituency, which happens to be the constituency that gave you the highest number of votes (84,000 votes) in the whole country in the 2020 elections, is nothing to write home about. Even more deplorable and depressing are the roads in the Amansie enclave which has areas such as Manso Nkwanta, Manso Adubia, Odotobri and Bosome Freho. Other Constituencies such as Atwima Mponua, Nsuta Kwamang Beposo, Mampong, Ahafo Ano North and South West, Asante Akyem North, South and Central Constituencies all can not boast of any decent road network.

The whole of Ghana, and particularly the good people of the Ashanti Region look forward in anticipation Mr.President, for you to showcase the unprecedented roads that you claim to have constructed in the Ashanti Region.

Mr. President, these are some of the vexed matters that the good people of the Ashanti Region look forward to have you address. It would better serve the Ghanaian tax payer for you to stay put at the Jubilee House, if your impending tour of Ashanti is going to be about your usual parading of wasteful long convoys and empty speeches laced with fun fair by party rank and file.

We in the NDC will be following your ill-fated tour with eagle eyes and we can assure you that any falsehood, including attempts to claim ownership of certain projects started by the erstwhile President Mahama/NDC administration as your own, will be swiftly exposed.

I'm Adwenpa-Hene |Blogger & Broadcaster Journalist. I am the CEO and manager of this noble website. I publish on Entertainment, Sports, Politics, Lifestyle, and Technology. You can also follow Us on : YouTube Channel - My Ghana Media TV, Facebook - MyghanaMedia TV , Twitter - @MyGhanamedia2 & Instagram - My Ghana Media TV. Email Address: [email protected] Contact Us: 0200818719
@@MyGhanamedia2
Previous My Government Is Constructing 32 Major Hospitals In Ashanti Region – Akufo-Addo
Next $330m Boankra Inland Port To Be Completed By March 2024