Breaking News
Home / GENERAL NEWS / ‘Even If You Seize Our Machines, We Will Use Our Hands’ – ‘Galamsey’ Night Workers Mock President Akufo-Addo [video] 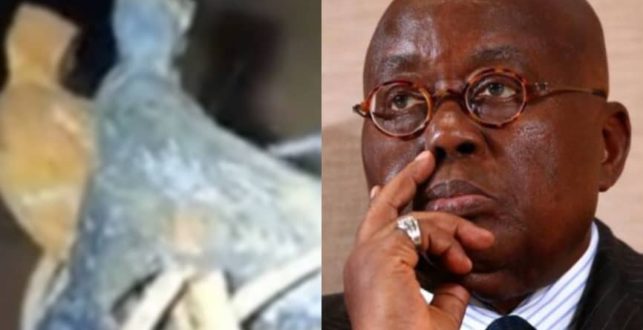 ‘Even If You Seize Our Machines, We Will Use Our Hands’ – ‘Galamsey’ Night Workers Mock President Akufo-Addo [video]

Despite the renewed conversations about illegal mining in the country, some of the persons involved seem unperturbed.

Not even the threats by government in face of the ongoing trial of ‘galamsey’ kingpin Aisha Huang has discouraged some of them as a latest video shows.

In a visual that popped up over the weekend, an excavator is seen causing extreme damage to the earth in a bid to extract precious minerals in the thick of the night.

“Akufo-Addo, I hope you can see us. We are working at night,” the workers indicated in the TikTok video.

The earth-moving equipment then transfers the soil onto another machine where some of the recalcitrants are seen washing it with water amid rants.

The wanton destruction to the environment is immediately seen in the viral video.

“If our machine is seized, we will use our hands in the washing. Everybody gets work to do. You can make ¢500 in one day. Which of your workers do you pay ¢500 a day?” the voice is heard asking.

The man heard to be filming the scene mocked the task force said to be investigating the locations of these sites.

“Look at this, work is ongoing,” he said in the video.

“We cannot stop this work. This is the school we attended,” he added while expressing confidence that there is no way the task force can locate them.

It is, however, unclear the location where the activity was being perpetrated.

The government’s anti-galamsey policies and strategies have come under criticism with many questioning the will to rid the country of the menace.

We really have a LONNNNNNG way to go as a country. Funny commentary but sad. pic.twitter.com/JWuajGWlhk

Last week, the Akufo-Addo administration came under fire from Asantehene, who claims the much-touted fight is shrouded in falsehood.

According to Otumfuo Osei Tutu II, the fight would remain a sham unless the appropriate individuals, particularly financiers, who are responsible for the illegal mining scourge, are identified.

“Are they saying they don’t know those behind galamsey in Ghana? The gold ends up being sold abroad. So who is behind the sale of gold abroad? Is it not the financier? How come he is not arrested?”

See also  That Is Nonsense’ – Tsatsu Tsikata On Burning Of Excavators

I'm Adwenpa-Hene |Blogger & Broadcaster Journalist. I am the CEO and manager of this noble website. I publish on Entertainment, Sports, Politics, Lifestyle, and Technology. You can also follow Us on : YouTube Channel - My Ghana Media TV, Facebook - MyghanaMedia TV , Twitter - @MyGhanamedia2 & Instagram - My Ghana Media TV. Email Address: [email protected] Contact Us: 0200818719
@@MyGhanamedia2
Previous Fuel Prices Jump To Almost GHS16 Per Litre
Next ‘Will Things Ever Get Better?’ – Sammy Gyamfi Asks Dr. Bawumia