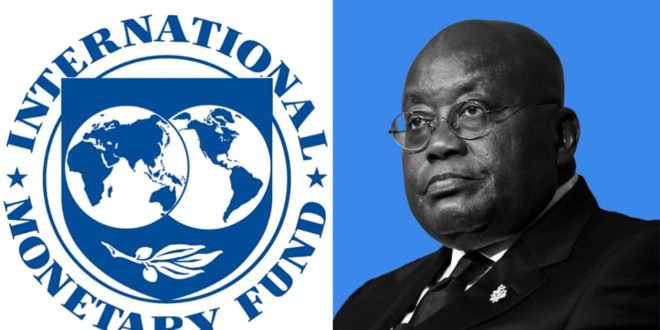 IMF To Ghana: Prove Debt Sustainability, Get A Deal

Ghana has to show proof that its debt levels are sustainable before the International Monetary Fund (IMF) can approve an economic support programme for the country.

That is according to the Director of IMF’s African Department, Abebe Aemro Selassie.

Mr. Selassie told the media in Washington on October 14, that the country also needed a credible economic reform plan before an agreement for a fund-assisted programme could be reached.

While insisting that the IMF is “extremely responsive” to the urgency of the country’s bailout request, the Director of the IMF’s African Department said “so much will depend on how quickly this reform plan can be fleshed out for implementation.”

“There are also important initiatives that have to be taken in terms of how the programme will be financed so that we can move forward,” Mr. Selassie said while responding to a question on when the country could expect a fund-assisted programme to help shore up reserves, curtail extreme price increases and regain market and investor confidence.

The press conference formed part of the 2022 IMF/World Bank annual meetings that ended on October 16.

The debt stock peaked at GH¢402.4 billion in September, equivalent to 68 per cent of GDP, and the debt service cost is estimated to be consuming more than 80 per cent of total revenue and grants.

Before joining the highly indebted poor countries (HIPC) in early 2000, the debt service burden was around 72 per cent of total revenue and grants.

On the debt sustainability precondition, Mr. Selassie explained that the IMF always insisted on lending to countries with sustainable debts as a way to ensure that finances and resources from a fund-assisted programme are channeled into critical areas that impacted lives and the economy.

Consequently, he said the IMF is awaiting the results of a debt sustainability analysis (DSA) exercise and the credible economic reform plan from the government to be able to determine when a deal could be sealed.

He said the reform plan had been presented but was now being interrogated by the fund staff and the government.

Mr. Selassie said: “To be clear, an important element of our engagement with Ghana, as is with any country, is making sure that when we provide finances and resources, the finances go to help the country and the people.

And if the debt is unsustainable, the extent to which that can happen is limited.”

“So, part of the work ongoing now is to assess where the debt sustainability situation is right now and how the government would like to address that. We are waiting for the results of that assessment,” Mr Selassie said.

The government has consistently played down concerns over an impending debt restructuring programme, although it recently constituted a five-member committee to collate ideas on a holistic domestic debt management strategy.

When the Graphic Business contacted the government for comment on October 16, the Minister of Finance, Ken Ofori-Atta, said the government was still hopeful of receiving a staff level agreement on an IMF deal by December.

“We continue to work closely with the IMF to speedily conclude DSA, which will inform further timelines.”

“The support we are receiving from the fund is tremendous, and the government is hopeful of getting a staff-level agreement before the end of the year,” Mr Ofori-Atta said from Washington, D.C.

The government resorted to the IMF for support in July this year after inflation surged to record highs and the cedi plummeted amid dwindling international reserves.

As of September, the cedi had lost more than 30 per cent of its value to the US dollar, partly pushing that month’s inflation rate to 37.2 per cent, the highest in almost two decades.

To help mitigate the impact on lives and the economy, the Finance Minister, Mr Ofori-Atta, has said President Nana Addo Dankwa Akfuo-Addo was keen on the government reaching a deal by December.

The Managing Director of the IMF, Kristalina Georgieva, said last September that a deal by December was possible.

Following the government’s request for a programme, two IMF missions have visited the country, with debt sustainability and an economic reform programme taking centre stage.

The Director of the IMF’s African Department said at the press conference that the fund was doing its “utmost” to ensure that support to the country does not delay.

Mr. Selassie stated that the actions of the fund after the country requested a fund programme was evidence that it was committed to ensuring that Ghana secured a programme as soon as possible.

“That is why, as noted earlier, a few days of the government requested support, we fielded a mission and we are doing our utmost best to forestall any kind of delay”

“But there are important reforms that have to be articulated very clearly.”

“There are also important initiatives that have to be taken in terms of how the programme will be financed so that we can move forward,” he said.