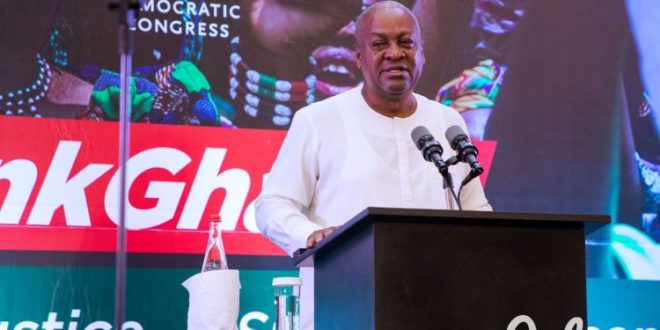 A poll by Global Info Analytics has again said former President John Mahama is heading towards victory in the 2024 general elections.

Among voters who are likely to vote in the 2024 elections, the poll said Mr. Mahama leads Dr. Mahamudu Bawumia by 29% lead.

The poll also showed Mr. Mahama regaining the Northern Region after lagging behind in earlier polls.

He also continues to lead in the North East region, the home region of the Vice President, according to the poll.

The poll showed that the Eastern Region may be slipping away from the NPP with Mr. Mahama polling 73 percent to Dr. Bawumia’s 24 percent.

The results of the survey were from a sample size of 5,661.

The sample size was allocated to all the regions based on the total number of voters in each of the regions as per the EC 2020 register.

A random simulation for all 275 constituencies was then run to select constituencies, where the allocated sample will be administered from each region.
Breaking the Eight

On whether the NPP can “Break the Eight” by earning a third successive term, approximately 70 percent of voters do not believe the NPP can win the 2024 election, whilst 19 percent believe the party can and 10 percent have no opinion.

According to the survey, approximately 46 percent of NPP voters do not believe the party can win the 2024 elections, compared to 43% who believe they can win.

Within the NPP, Trade and Industry Minister, Alan Kwadwo Kyerematen has continued to expand his lead over Dr. Bawumia.

The poll shows that Mr. Kyerematen now leads Dr. Bawumia with 44 percent to the latter’s 31 percent.

“Alan John Kwadwo Kyerematen takes commanding lead among general voters for the NPP race as he leads Dr. Mahamudu Bawumia 44% to 31%. Kennedy Agyapong is shaking up the race by draining support from Kyerematen and Dr Bawumia and comes third with 14% of the votes’, the report said.

The poll noted that Dr. Bawumia’s slide in the poll coincides with the country’s worsening economic situation.

In the NDC race, Mr. Mahama is on course to lead the party.