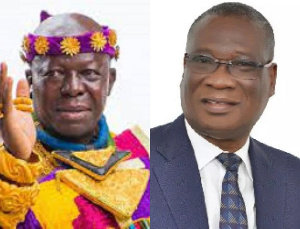 According to the Asantehene, his objections to Dr. K.K. Sarpong’s nomination is because his nomination did not follow due process.

He intimated that family heads who lead the nomination process of Dr. Sarpong did not have the mandate to do so and they also failed to consider some persons who have rights to the Offinso stool.

“Kofi Kodua Sarpong has lived a good life, he has achieved a lot in life. If he is the person, you the elders of Offinso want, you should have come to me and told me that you want him to be your chief if I accept him. Is that not what you should have done? And now that you have gone your own way and you are having difficulties you are coming to me for what.

“That is why I was asking the elders why they will let someone with a curse on him lead their plea. That is the issue I have. I have cancelled the nomination process.

“I know that Kofi Konadu Sarpong is the person you want as chief if that is true came and tell me about it. I know that you have sat with him and have come to an agreement. But the person leading your plea does not have the right to do so now,” the Asantehene said in Twi at the Manhyia Palace in a video shared by Opemsuo Radio which was sighted by GhanaWeb.

He reiterated that he has cancelled the entire nomination process and instructed the elders of Offinso to start it afresh.

The Kingmakers of the Offinso Traditional Council in the Ashanti traditional area unanimously nominated Dr K.K. Sarpong as the successor of the late Paramount Chief of the area, Nana Awiafe Akenten III.

The Offinso Manhene died on Saturday, October 2, 2021, after falling ill for some days.

The kingmakers of the traditional area on Friday, May 6, 2022, at a ceremony in Offinso, through Akyeamehene Nana Kwaku Wiafe, presented Dr. Sarpong as the New Paramount Chief for the Offinso Traditional Council.

Watch the Asantehene’s remarks in the video below: