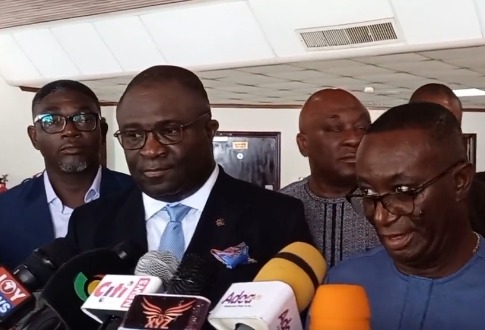 The Ashanti Youth Network (AYN) has issued a petition against anti-ken Ofori Atta MPs calling on the New Patriotic Party national executives to deal with them.

According to the Youth Network, those MPs have shown gross disrespect to the office of the president, which could create confusion and have the potential to activate chaos in the country.

A copy of the petition sighted by MyGhanaMedia.com  and signed by the Leader of the Youth Network,  Kwaku Boateng  respectively accuses Member of Parliament (MP) for Asante-Akim North Constituency , Andy Appiah kubi and the other NPP MPs  of showing gross disrespect to executives of the party and its structures.

Punish Andy Appiah Kubi and his gang of desperados now

The Ashanti Youth Network has taken note of the uproar and the controversy in Parliament on Tuesday 25th October 2022, and wish to express our disappointment about the whole saga.

In all truth, we’re startled by the conduct of the MPs who held a press conference to impress on the President to relieve his Finance Minister of the responsibility of managing the national purse or risk losing their support for government business going forward.

We’re also surprised that this group of MPs also want the Minister of State in charge of Finance at the Ministry of Finance, Charles Adu Boahen, out of government.

Having come to the full realization of the intent of Andy Appiah Kubi and his gang, we are of the view that this is not only a grand scheme to denigrate the president, but also a well-crafted agenda to collapse the regime.

We know Andy Appiah Kubi and his group are disgruntled and they’re obviously out to dent the image of the NPP and subject it to public ridicule.

Otherwise, what else could possibly be the motivation of this perfidious and parochial call?

Indeed, if not for self-centeredness and self-aggrandizement, why would any good party folk in the NPP make such illogical call for the removal of the Finance Minster at this material hour, when the country is in talks with the International Monetary Fund(IMF) for balance of payment solutions?

This is as an act of treachery, hypocrisy and self-harm, and anyone not deeply concerned by such a stance, could be part of the problem.

The conduct of these MPs does not meet the standard required of a party representatives,and the Ashanti Youth Network is specifically calling them out for censure.

While dedicated youths are busy in the trenches battling to ensure the NPP retain power in 2024, these self-styled rabble rousers are sitting in their cubicle somewhere planning or rather positioning themselves to cause damage to the party.

Ashanti Youth Network sees this call on the removal of the Finance Minister and the Minister of state, Adu Boahen as a collective idea of those who want to bring the name of the NPP into disrepute.

We call them political merchandisers of the 21st century; they are not patriots.

Ingratitude is the perfect adjective that describes Andy Appiah Kubi, his cohort and their attitude towards the President and party that brought them into political prominence.

Let it be known to them that the President reserve the right to appoint and disappoint. It is his prerogative to remove any of his ministers whenever he deems necessary.

Again, we commend the decent members of the majority bench for not falling prey to the devices of the lunatic fringe.

We request the leadership of NPP to look into the gross disrespect that has been inflicted on the foundation of the party and hope that they will call Andy Appiah Kubi and his gang of desperados to order.

See also  'We Have To Start Planning For A New Capital City' -Dr. Zanetor

We cannot neglect the dire consequences this may have on our noble party’s history and the upcoming elections, if we do nothing to redress this impertinence.

DISCLAIMER: The Views, Comments, Opinions, Contributions and Statements made by Readers and Contributors on this platform do not necessarily represent the views or policy of Multimedia Group Limited.