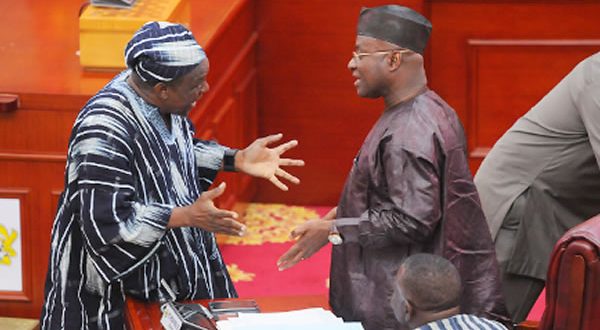 It was a healthy but brief debate in parliament on Wednesday, October 26, 2022, when the Majority Leader in Parliament, Osei Kyei-Mensah-Bonsu, offered a strong objection to the verdict of the Speaker of Parliament.

The Speaker, Alban Bagbin, had delivered a long verdict on a motion brought before the House for the declaration of the seat of the Member of Parliament for Dome Kwabenya, Sarah Adwoa Safo, vacant.

The much-anticipated ruling by the Speaker, however, left many disappointed as he ruled that the motion by a committee set up to look into the matter of some three MPs who had absented themselves from parliament for a long time should rather be tabled for a debate.

According to Alban Bagbin, the decision on whether or not to declare the seat of the Dome Kwabenya legislator vacant can only be determined after the debate.

“As I have noted in this ruling, the decision (sic) on not to admit a motion is the exclusive preserve of the Speaker. In view of the foregoing, the House is well within its right to receive and consider reports of the committee and make a determination arising out of the consideration.

“In the circumstances, it is my ruling that the motion was rightfully admitted and the report of the committee is subject to the consideration of the house. It goes without saying that the (sic) objection of the Majority Leader today (sic) is hereby dismissed…” he said.

He, therefore, dismissed the objection of the Majority Leader to the admissibility of the committee report for the consideration of the House.

This was however not pleasant news for Osei Kyei-Mensah-Bonsu, who got up to make his disagreement clear to the Speaker.

Describing the ruling of the Speaker of Parliament as ‘unfortunate,’ the Leader said that he could not understand why Alban Bagbin would come to such a conclusion.

“Mr. Speaker, you have sent us on a very (sic) tortuous journey and clearly, I must state that I didn’t know where you were taking this House,” he said.

But just before the Majority Leader could make a further comment, quoting portions of the Speaker’s ruling, Alban Bagbin cut in, making it clear to the former that he could not put his ruling up for a debate.

“My ruling is not subject to debate. You can say you disagree with me and you know what to do. Simple. You cannot go and be quoting my ruling and trying to state your position on that. That definitely is not allowed by our rules,” the Speaker clarified.

But it appeared the message had not been properly delivered to the Majority leader.

In another attempt to still pursue his earlier tangent, Osei Kyei-Mensah-Bonsu again fumed at the speaker, demanding that the Speaker listens to him.

“So, you’ll not listen to me? I’ve had the patience to listen to you. You must also listen to me. Mr. Speaker, you have made a ruling that I totally disagree with. I think it doesn’t sit with the constitution and we must be able to comment on that,” he stated.

Quickly coming in, Alban Bagbin again stated, “Honourable members, the Majority Leader is entitled to totally disagree with me and then he knows what to do.”

The following is what transpired between them:

Osei: Mr. Speaker, I know what to do, and I’m expressing my discomfort with this unfortunate ruling that you have made; I totally disagree, I think it doesn’t sit with the constitution and with your own earlier statement you made in this House in relation to this same thing; very inconsistent. To that extent, Mr. Speaker, I’m serving notice we know what is to come and we’ll come with a substantive motion to challenge your ruling which I find very obsequious.

Bagbin: Honourable Majority Leader, as I stated earlier, you are totally entitled to disagree with me but to describe my ruling as unfortunate is a choice of word that by our rules – read Order 93. The fact that you disagree with me does not mean that your disagreement is sacrosanct. I will never use the words ‘unfortunate’ on your disagreements. I believe that that word offends against Order 93 and I will ask you to withdraw that word and apologise to me.

Bagbin: Majority Leader, thank you so much. You recall when you were Minority Leader and your deputy was Honorable Dominic Nitiwul, I was Majority Leader and I used the word, ‘you don’t understand’ in trying to explain a matter, and your deputy objected to my choice of the word, ‘you don’t understand.’ That meant that it was an insult to your intelligence. The Right Honourable Doe Adjaho, who was presiding, called on me to redraw and I did. I’m sure you recollect that because you have a sharp memory.

Bagbin: I only decided to engage with you and give you this latitude because you have been with me for a long time, and when I was a leader in 2001, I think you were a deputy whip and I went around the whole world with you, always leading you. I expected that now that you have learned so much, you are entitled to disagree and argue with me but I’m still older than you. And, you’ll always remain my friend until doom’s day. Whether you agree or disagree with me, whether you are fighting me or not, you’ll still remain my friend.

Watch the full interactions below: