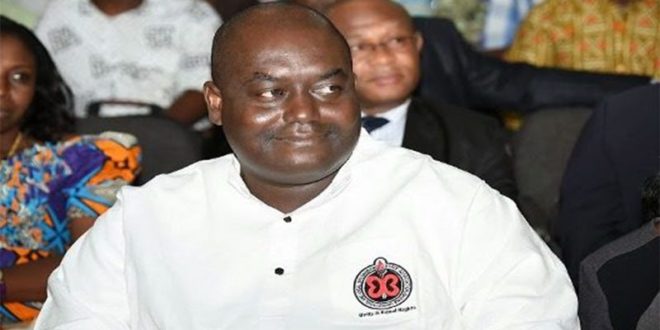 Executive Secretary of the Civil and local Government Staff Association (CLOGSAG), Isaac Bampoe Addo, has asked President Nana Addo Dankwa Akufo-Addo to come up with measures to clear all middlemen (goro boys) at the Finance Ministry.

It is unclear who he labeled as the ‘goro boys’ but he says they are the cause of the economic challenges facing Ghana.

Speaking exclusively to TV3’s Daniel Opoku on Friday October 28, Mr Bampoe Addo said the only way to rescue the economy is to get rid of these persons and replace them with civil servants.

He said “For us Civil servants, we expect the President to make the statement on the goro boys and apparatchiks that have invaded our offices. There should be a special taskforce to clear all of them from our offices.

“The foundation of every nation is the civil service, so once the civil service is not being being able to perform professionally and they are being disrupted by these goro boys and apparatchiks, we will expect that he makes a statement on that, that the taskforce is being formed to clear all ministries of apparatchiks and goro boys.

“Before anybody becomes a personal assistant, approval must be sort from the Chief of Staff. So this what we are expecting from the President.

“So if we want to bring the economy back together we should sack all of them from the Ministry of Finance, that is the only way we can save the economy.”

The Majority caucus in Parliament threatened to boycott the presentation and debate on the 2023 budget statement if President Akufo-Addo does not remove Mr Ofori-Atta and Adu Boahen.

The NPP MPs believe that the prevailing economic situation in the country does not make it right for the two gentlemen to remain in office hence the President must ask them to go.

Addressing a press conference in Parliament on Tuesday, October 25, a lawmaker for Asante Akyem North, Andy Appiah Kubi said “We are unhappy with the developments in the country, we consulted our constituents who also expressed same sentients.

“We want the President to remove Ken Ofori and Chares Adu Boahen.

“We are by this medium communicating our strong desire that the President changes the Minister of Finance and the Minister of State in the Finance Ministry without further delay.

“We want to serve notice, and notice is hereby served that until such persons as aforementioned are made to resign or removed from office, we members of the Majority Caucus here in Parliament will not participate in any business of Government by or, for the president by any other Minster.

“We hope that those of us in the back bench and members of the Majority caucus will abide by this prayer.

“We are saying that if our request is not responded to positively, we will not be present for the budget hearing neither will we participate in the debate.

I'm Adwenpa-Hene |Blogger & Broadcaster Journalist. I am the CEO and manager of this noble website. I publish on Entertainment, Sports, Politics, Lifestyle, and Technology. You can also follow Us on : YouTube Channel - My Ghana Media TV, Facebook - MyghanaMedia TV , Twitter - @MyGhanamedia2 & Instagram - My Ghana Media TV. Email Address: [email protected] Contact Us: 0200818719
@@MyGhanamedia2
Previous Closure Of Forex Bureaus: Owners May Lose Licences Forever – BoG
Next Ghana Have Been Cursed With Leaders Who Care About Their Pockets – Ebo Whyte