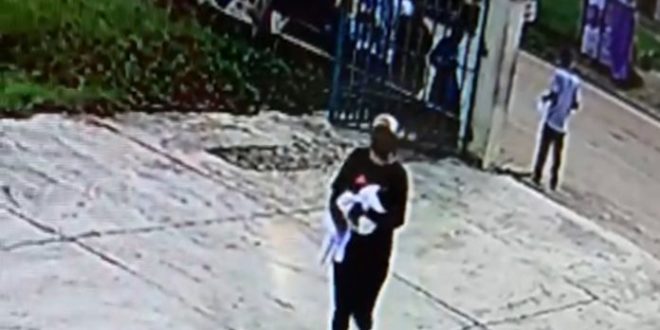 A CCTV footage from the Abura Dunkwa Government Hospital has captured the lady who stole a two-weeks old baby from the Hospital.

The lady, dressed in all black with the baby clad in white was seen walking from the main gate of the hospital towards the main building.

There was a report of a missing baby boy, two weeks old, who was abducted at the Abura Dunkwa Government Hospital in the Abura Asebu Kwamankese District of the Central Region.

Father of the baby, Ebenezer Mensah had noted the baby was stolen from the hospital at the early hours of Friday, October 28, 2022.

He explained that the wife was accompanied by a ‘good Samaritan’ to the hospital only to abscond with the 14-day-old baby.

“We both live here at Abura Edumfa but when it was about a month for my wife to deliver, I sent her to go and deliver at her mother’s place at Abura Tuakwa. So she was living there with her mother even after she delivered.

“She was operated so her mother often accompanies her to the hospital for treatment.”

He narrated further that, “so on Friday, I called her in the morning to find out if her mother would be able to send her to the hospital or I should send someone to help her.
“She told me her mother would take her so I didn’t bother myself. Later in the afternoon, I had a call to come to the hospital only for me to be told my son has been stolen. I’m very sad now and I don’t know what to do.”

The baby’s father noted he later learnt the wife’s mother did not go to.the hospital with her but rather a stranger who purported to be offering a helping hand, who managed to bolt away with the baby.
“After asking my wife to tell me the truth, she told me it wasn’t her mother who took her to the hospital but a certain lady. She first told me she knows the lady and that the lady is her friend but that was a lie. She does not know the lady from anywhere.

“Before they left, her mother was bathing so she also didn’t see the lady who went with my wife. So it was the lady who was holding the child at the hospital and before they realized, she was gone with my child.”
Ebenezer Mensah is 28 years old while his wife, Monica Turkson is 23.

The Abura Dunkwa Police station is currently handling the case.