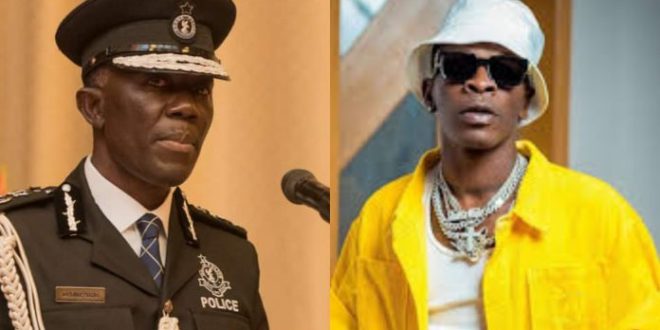 Shatta Wale Under Investigation over His Post On Fennec’s Death

The Police have confirmed that they are probing popular Dancehall artiste, Shatta Wale, over a social media post on the death of Artiste Manager, Fennec Okyere. 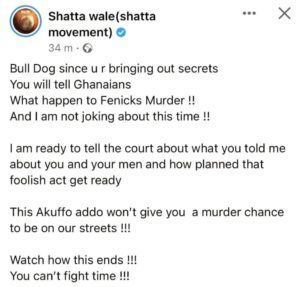 The controversial artiste suggested that his former manager, Bulldog, born Nana Asiama Hanson, was allegedly involved in the murder of the late Fennec Okyere.

“The attention of the Police Service has been drawn to a tweet by Charles Nii Armah Mensah Jnr., popularly known as Shata Wale, regarding the death of artiste Manager Fennec Okyere. The Police have made contact with Shata Wale who is cooperating with us on the matter,” the police said in a statement.

“The Police would like to put on record that the recently established Cold Case Unit, has been working for months on all unresolved murder cases, including that of Fennec Okyere with support from the affected families. This new development from Shata Wale is therefore going to complement our ongoing investigation.”

“We would like to take this opportunity to thank all the families who have been working with the Cold Case Unit since its establishment for their cooperation and understanding. We wish to assure the public that the Police will continue to work relentlessly on these cases in order to bring closure to the affected families.”

See also  Dr. Bawumia: No Government Has Done As Much In TVET As Akufo-Addo's Administration 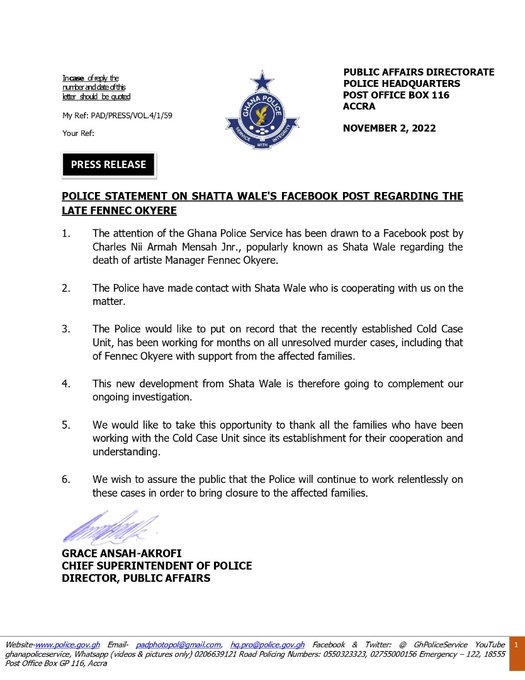 Fennec Okyere, who was the manager of the popular musician, Kwaw Kese, was murdered at his Manet Gardens residence on Spintex Road, Accra on Thursday, March 13, 2014, by unknown assailants.

Following his death, Bulldog was arrested by the Police Criminal Investigative Department (CID) and interrogated over the death.

But the police are yet to complete the investigations, several years on.