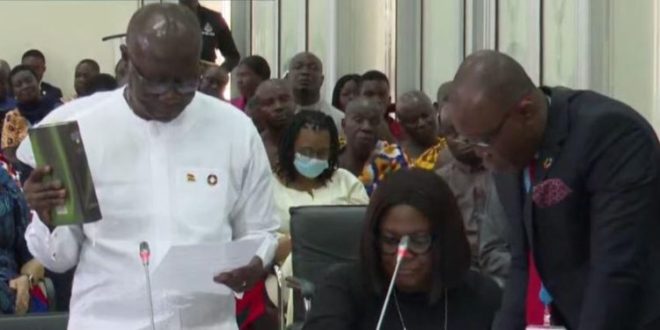 Let’s Rise Above Witch-Hunting And Entrapment – Ofori-Atta Tells MPs, Others

The Finance Minister, Ken Ofori-Atta has called on the clergy, traditional rulers, Members of Parliament (MPs) and the general populace to rise above witch-hunting and entrapment, in the country’s pursuit to grow its economy.

The Finance Minister, today November 18, 2022, appearing before the ad-hoc committee of Parliament probing the vote of censure levelled against him, said the country is being tested through the economic hardship and thus a united effort is required of its citizenry.

Mr. Ofori- Atta further charged the clergy, churches and chiefs to find a solution to the ongoing impasse in Parliament.

“As a nation, we are being tested. Our circumstances require a united and concerted response to the crisis. I implore our chiefs, elders and churches to take the mantle and speak a common language. Let us all work as one country to support labour negotiations, find a solution to the impasse in Parliament, and rise above witch-hunting and entrapment. These are not ennobling and progressive for a society seeking transformation,” the Finance Minister suggested.

Responding to Mr. Ofori Atta, the Co-Chair of the ad-hoc committee, Dominic Ayine, jokingly asked the Finance Minister if he appears to him as a witch or a hunter.

“Thank you, Hon. Finance Minister, but do l look like a witch? Or that’s just by the way, or maybe l look like the hunter?” he asked.

The Finance Minister has been accused of conflict of interest, gross mismanagement of the economy among others.