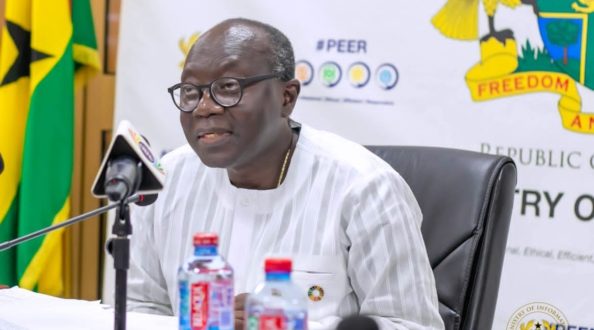 Metropolitan, Municipal and District Assemblies (MMDAs), Ministries, Departments and Agencies (MDAs) and State-Owned Enterprises (SOEs) have been directed to reduce fuel allocation to political appointees and their Heads by 50 per cent.

The Cabinet directive, which takes effect from January 2023, is expected to reduce government expenditure on fuel consumption.

Mr Ken Ofori-Atta, the Minister of Finance made this known when he presented the 2023 Budget Statement and Economic Policy of the Government to Parliament on Thursday.

He said the directive applied to all fuel allocation methods including coupons, electronic cards, chit systems, and fuel depots.

This directive applies to all methods of fuel allocation, including coupons, electronic cards, chit system and fuel depots…Accordingly, 50% of the previous year’s (2022) budget allocation for fuel shall be earmarked for official business pertaining to MDAs, MMDAs and SOEs,” he said.

The Minister also announced an extension of the moratorium on the purchase of vehicles for government work.

The Minister directed all government institutions to submit a travel plan for the year 2023 by mid-December to the Chief of Staff, and instructed that as far as possible, meetings and workshops should be held within the official environment or in government facilities.

Furthermore, all Government sponsored external training and Staff Development activities at the Office of the President, Ministries and SOEs must be put on hold for the 2023 fiscal year.

Mr Ofori-Atta announced a further cut in expenditure to affect appointments including salary freezes, and the suspension of certain allowances like housing, utilities, and clothing.

He declared a freeze on new tax waivers for foreign companies and the review of tax exemptions for free-zone, mining, oil and gas companies, and a suspension on hiring civil and public servants.

No new government agency shall be established in 2023, and MDAs, MMDAs and SOEs must not print diaries, notepads, calendars, and other promotional merchandise for 2024.

The minister also put on hold all non-critical projects for 2023 Financial year.

I'm Adwenpa-Hene |Blogger & Broadcaster Journalist. I am the CEO and manager of this noble website. I publish on Entertainment, Sports, Politics, Lifestyle, and Technology. You can also follow Us on : YouTube Channel - My Ghana Media TV, Facebook - MyghanaMedia TV , Twitter - @MyGhanamedia2 & Instagram - My Ghana Media TV. Email Address: [email protected] Contact Us: 0200818719
@@MyGhanamedia2
Previous There Shall Be No Hampers For 2022 Chistmas – Ofori-Atta Tells MMDAs
Next Coach Otto Addo Blames Referee For Ghana’s Loss To Portugal