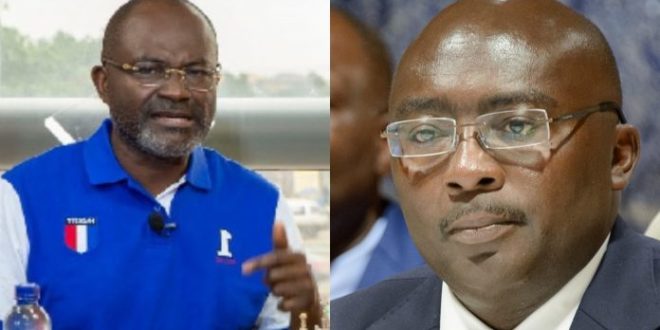 The vociferous legislator has averred the Veep’s poor handling of the economy resulting in a depreciated Cedi has made him lose a lot of money.

In a viral audio on social media, the MP says the Dr. Bawumia’s excuse of being being crippled by the Finance Minister as a rssult of being bullied is something unheard of in any polity.

As a result, he has called for the face leading the Economic Management Team to be changed to pave way better alternatives.

He asserts the Vice President is only an expert in talking not in deed.

“We need to change the same face that has been lecturing you on economic theories, telling you when your fundamentals are weak, the exchange rate will expose you. When you were making that statement, the exchange rate was 4.20. Today it is 15 cedis.

“I have lost 12 million dollars because of his incompetence and his theory in economics,” he chided.

“If you are a Vice President, how do you sit down for a Finance Minister to bully you?”
– Kennedy Agyapong jabs Bawumia

Please listen to the END. pic.twitter.com/HrKLZaxH9p

Both Mahamudu Bawumia and Ken Agyapong are among the key candidates contesting for the NPP flagbearer alongside John Alan Kwadwo Kyerematen.

I'm Adwenpa-Hene |Blogger & Broadcaster Journalist. I am the CEO and manager of this noble website. I publish on Entertainment, Sports, Politics, Lifestyle, and Technology. You can also follow Us on : YouTube Channel - My Ghana Media TV, Facebook - MyghanaMedia TV , Twitter - @MyGhanamedia2 & Instagram - My Ghana Media TV. Email Address: [email protected] Contact Us: 0200818719
@@MyGhanamedia2
Previous Ken Agyapong Has A Reputation For Outright Fabrications – NPP Regional Chairman Writes
Next Adu Boahen Spotted With IMF Team In Ghana; Has He Truly Been Sacked?