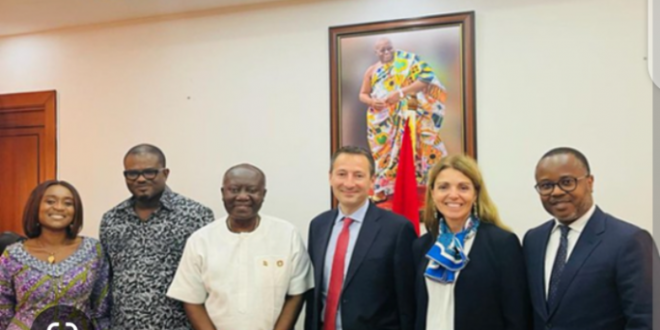 Adu Boahen Spotted With IMF Team In Ghana; Has He Truly Been Sacked?

A team from the International Monetary Fund has arrived in Ghana for the final lap of engagement with government on its bailout from the Bretton Woods Institute.

They are expected to close a staff level agreement with the Fund before the end of the year.

A picture circulating on social media indicate a group photograph of members of the team with Ghana government representatives comprising the Finance Minister, Ken Ofori-Atta, Abena Osei Asare, a Deputy Finance Minister and embattled Charles Adu Boahen with others.

Mr. Adu Boahen was recently sacked by President Akufo-Addo over an investigative piece carried by Anas Aremeyaw Anas’ TigerEyePi indicting him for corruption.

A letter released from the Presidency and signed by its Director of Communications, Eugene Arhin, said the matter was going to be investigated following the dismissal of Mr. Adu Boahen, the former minister of state at the ministry of Finance.

Prior to his sack, the Majority caucus in Parliament have demanded he be sacked with the Finance Minister, Kenneth Ofori-Atta, for several charges including incompetence and plummeting Cedi due to economic mismanagement.

Meanwhile, the group photograph making rounds on social media includes Mr. Adu Boahen, making many question whether he was really sacked or not.

President Akufo-Addo had defended the Finance Minister and pleaded with the Majority to allow him complete his negotiations with the IMF before a consideration is made on whether he be sacked or not.

The question also remains whether government lack competent persons to continue the engagement or not, making the sacked minister still involved in the negotiations.