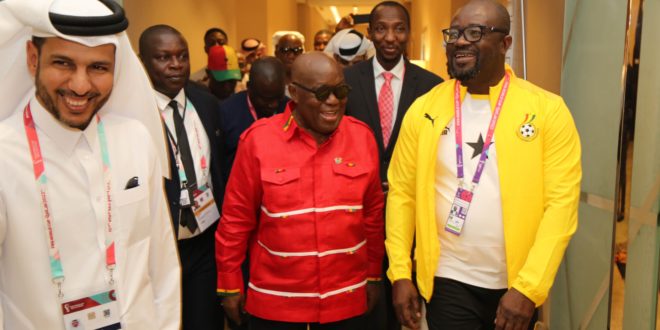 In the era of tweets being coughed up under the mantra of ‘The internet doesn’t forget,’ politicians are often the subject of social media posts that literally slap them in the face.

President Nana Addo Dankwa Akufo-Addo is facing one such social media post in the wake of the Black Stars exit from the 2022 World Cup in Qatar.

The Otto Addo-led team fell 2 – 0 to Uruguay in a must-win fixture on December 2, 2022; which result meant the two teams exited the tournament with Portugal and South Korea advancing.

A 2014 tweet by the president has resurfaced as people mock its content relative to recent happenings in the country.

It reads: “No water, no electricity, no petrol, no jobs, no mercy, no World Cup cictory! #Ghana” 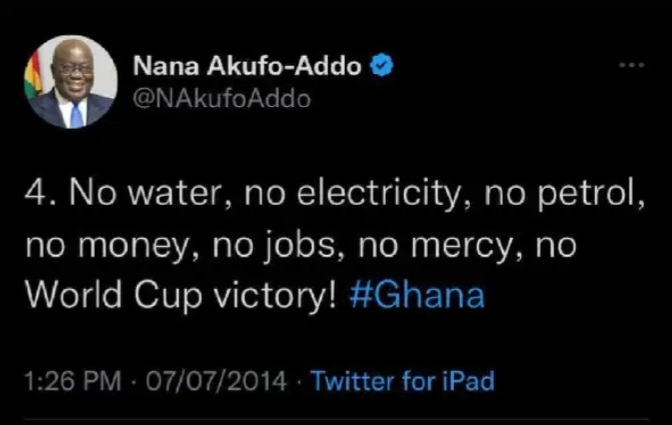 The president had urged the team to take revenge on the Uruguayans after a 2010 incident where Luis Suarez, their captain in yesterday’s game thwarted Ghana’s prospect of making history by becoming the first African side to qualify for the semi-finals of the World Cup.

Akufo-Addo has yet to comment on the outcome of the match.

In 2014 when his tweet was made, the then Asamoah Gyan-led Black Stars made a disastrous outing in Brazil when they failed to win a single match yet ‘cooked’ a global spectacle that saw dollars being flown to pay their appearance fees for fears of a boycott.

Coach Otto Addo has resigned his position in the post-match press conference.

Ghana head coach Otto Addo has decided to resign from his role. His chapter as Ghana manager is now over. 🚨🇬🇭 #Qatar2022

The decision has been made as Otto Addo will continue as assistant coach at Borussia Dortmund. pic.twitter.com/d6RtbeLgHi

The Black Stars of Ghana had one task going into their final Group H fixture at the 2022 World Cup.

Win at all costs, worse case draw against Uruguay and secure passage into the Round-of-16 stage of the competition.

The match was, however, settled with three major incidents in the first half. A penalty miss by Black Stars skipper Andre Dede Ayew, when the score was goalless.

Then Giorgian de Arrascaeta’s two goals for Uruguay which came in quick sucession, consigned the Black Stars to a second World Cup defeat against the South Americans who broke hearts of Africans in 2010.

Their 2 – 0 victory over the Black Stars was, however, not enough to get them through to the next round of the tournament as South Korea beat Portugal 2-1.

With Uruguay in dire need of a third goal to progress to the next round of the World Cup, Suarez was reduced to tears as efforts to score another goal proved futile.

Portugal and South Korea advanced from Group H as Uruguay and Ghana exited the tournament after finished 3rd and 4th respectively.

More reaction on social media below:

4. High cost of water, high cost of electricity, astronomical increase in petrol prices, no money, no hope for jobs, no mercy,unprecedented tyranny and intolerance for critisms, no World Cup victory! #Ghana

4. No water, no electricity, no petrol, no money, no jobs, no mercy, no World Cup victory! #Ghana pic.twitter.com/EbRMRENmXt

Thought the world cup will make us forget the hardship economy. But NO WORLD CUP VICTORY, The price for everything has gone up, NO Employment at the public sector, VAT increased to 2.5% the depreciation of cedi, still the nation is govern by corrupt NPP leader's. pic.twitter.com/HJ9X9KSVjn